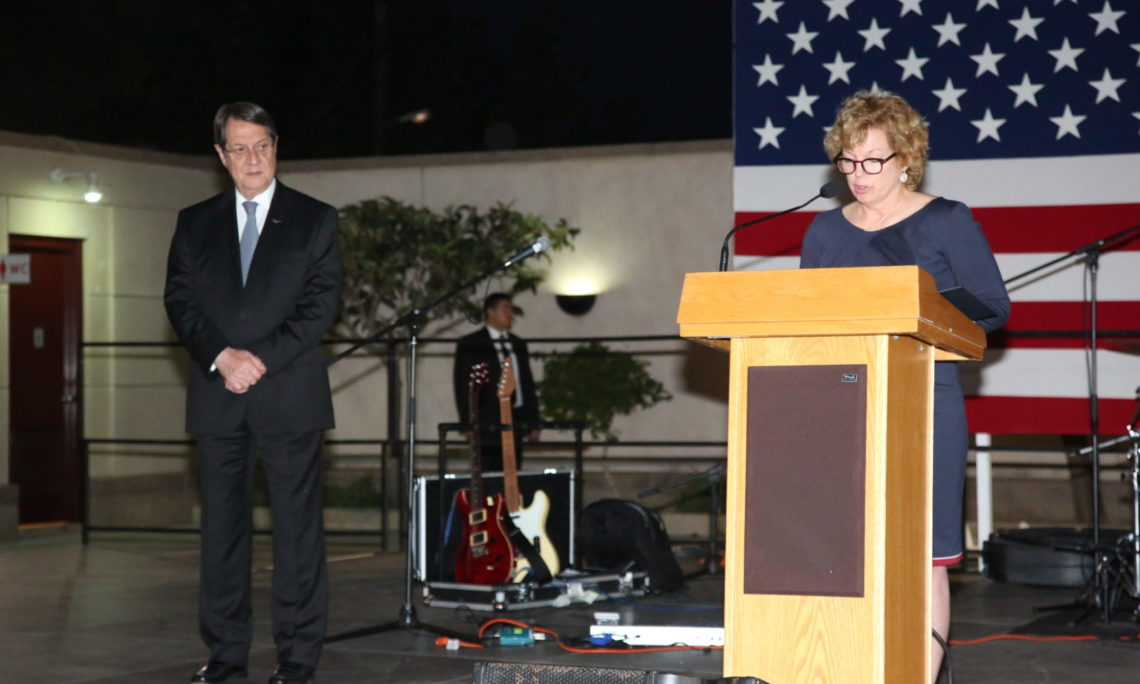 Mr. President, we are honored to have you here tonight.  Ministers, Excellencies, Eminences, friends, good evening!

Welcome to the U.S. Embassy on this beautiful and surprisingly cool night as we celebrate the two hundred and forty-first anniversary of America’s independence.  We are happy to share this holiday with our friends from across the island.

I would like to say a special thank you to our business partners who supported this event with contributions, and the food and drink we will share. I want to thank the U.S. Navy band that came here from Italy and that has entertained us at our events for the past few years. And I’d like to express my appreciation to the U.S. Marines for their role here tonight and what they do every day to keep our  people safe.

This is a Fourth of July Independence Day party, and yes, Americans have the same calendar as the rest of you.  But we are holding this event early, in deference to the July temperatures of Nicosia and in recognition that some of our American colleagues in the embassy will depart Cyprus in the weeks ahead.

May 25th is not as famous as the Fourth of July in American history, but on this date, events took place that shaped our history and destiny. On May 25th, 1787, George Washington presided over the opening of the Constitutional Convention.  Our new nation was just a few years old, and was struggling under the weak government first created by the founding fathers.

On the eve of the talks, George Washington wrote in a letter to a friend: “A few short weeks will determine the political fate of America for the present generation, and probably produce no small influence on the happiness of society through a long succession of ages to come.”

In September 1787, after four months of often bitter debate, and under the leadership of Washington, representatives of the thirteen states created the federation that has defined the United States for more than two centuries. Washington was elected president, and has since been known as the “Father of our Nation.”

Nearly two hundred years later, on May 25th, 1961, another American, President John F. Kennedy, made an audacious prediction – that the United States would put a man on the moon before the end of the decade.  Many considered this impossible since at the time, the U.S. had only a fledgling space program. Speaking to Congress, President Kennedy made clear that it would require a great collective effort.

“In a very real sense, it will not be one man going to the moon – if we make this judgment affirmatively, it will be an entire nation.  For all of us must work to put him there.”  Congress said yes; the nation rallied behind the effort, and eight years later, Neil Armstrong became the first person to step on the surface of the moon.

These dates in history show the enduring traits of Americans – determined leadership,  audacious vision, the drive to innovate, and a celebration of individual and collective achievements.  We don’t claim these traits as ours alone, but they have shaped our nation, and continue to do so today.

Across the world, we are facing many challenges.  And in such moments, we need to call upon our own courage, determination, and leadership to make the future better, more peaceful, and more prosperous for all.

In these challenging moments, we particularly appreciate our friends. To our Cypriot friends here with us tonight, the United States, with good will and in partnership, has stood by your side over the years.  We have supported your efforts to build a better future, contributing hundreds of millions in dollars to bi-communal programs and to peace-keeping.  We support the Cypriot-led talks, facilitated by the UN, to bring to an end the long division of the island.  We place hope in a future when Cyprus is unified as a bi-zonal, bi-communal, federation.  So much progress has been made. It should not be lost.  A unified island would offer a prosperous future for all Cypriots, and inspire us all.

Mr. President, the United States-Cyprus relationship is strong.  We are working together to combat terrorism and crime, to bring stability and prosperity to the region, to promote cultural and educational ties, and to increase business opportunities for Americans and Cypriots.

Just this past year alone, we have seen an extraordinary increase in U.S. business investment. We are also proud to see that more than 400 Cypriots are studying at American universities, and recognize the thousands of others who went before them. And we welcome the growing number of Americans studying in Cyprus.

We support Cyprus’ young entrepreneurs, journalists, academics and others through exchange programs.  We are investing in each other’s future generations.

Now returning for a moment to the date of May 25th .  Another important event happened.  On this date in 1977, the film “Star Wars” premiered.  So taking a little liberty with the movie’s timeless words,

Mr. President, we are very honored to have you with us tonight, and invite you to give a few remarks.