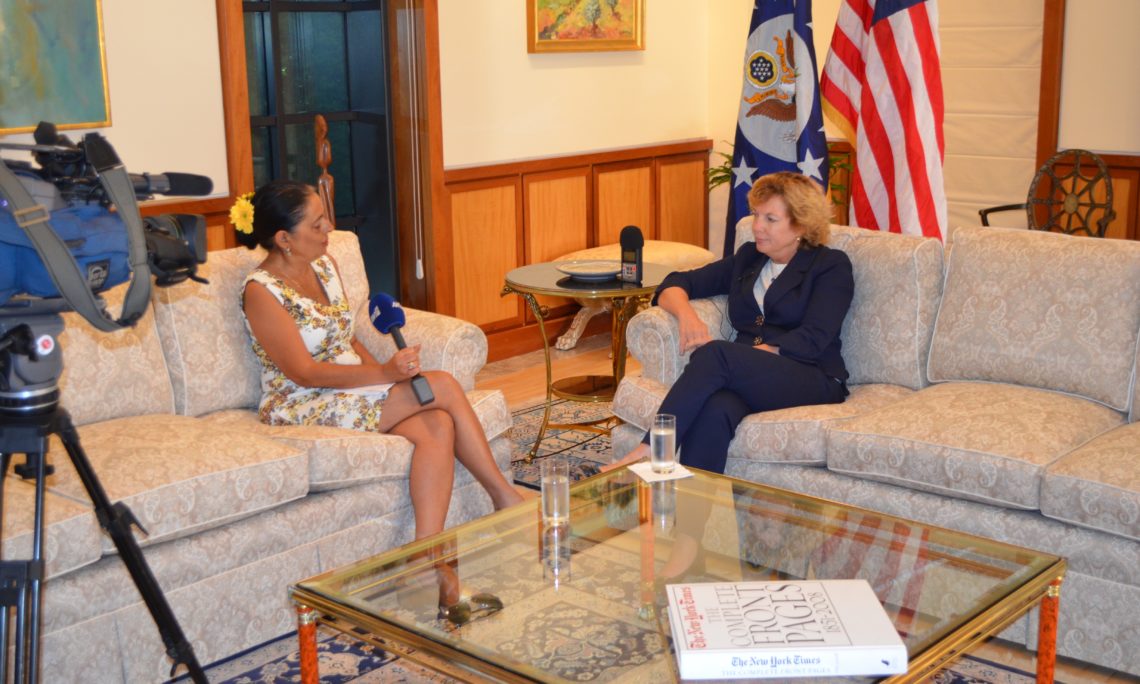 On the fifteenth anniversary of the terrorist attacks of September 11, 2001, Ambassador Doherty spoke to Dimitra Molyva of Ant1 television, sharing her personal memories of that day.

Dimitra Molyva: It’s the fifteenth anniversary of the terrible terrorist attacks in the U.S. at the twin towers and the pentagon. Where were you at that time?

Ambassador Kathleen Doherty: Fifteen years ago I was actually sitting in my office in Rome, Italy. I was working at the embassy there, and a colleague of mine had been watching CNN and came running down the hallway and said “there’s been a plane that hit the twin towers in New York.”  So we all turned on CNN and we all saw the first plane hit and then we watched the second plane hit.

Dimitra Molyva: And how did you find out about it?

Ambassador Kathleen Doherty: Well, we knew, I think, I don’t know why, all of us knew, maybe it’s because of what we do for our careers, but we knew it was not an accident. After the first plane hit some of us thought it might have been an accident, but when the second plane hit we knew immediately that it was a terrorist incident. And, of course, none of us knew what that really meant, across the world I think none of us knew what that moment really meant to all of us. But it was incredibly shocking, and as I am a New Yorker myself, I grew up in the city and in the suburbs, I couldn’t believe the scenes that I was watching. As we were watching the film and the images of the people jumping from the windows and running down the streets and in the buildings when they actually collapsed, I think that all of us were in a state of absolute disbelief.

Dimitra Molyva: As a New Yorker and as a diplomat, how did you react?

Ambassador Kathleen Doherty: I think, interestingly enough, the thing that happened first, September 11th is my mother’s birthday and she was, at the time, in her mid-seventies. I knew that she didn’t listen to the radio or watch TV in the morning so I decided that I needed to tell her what was happening. So, I called her up and she was all very cheery on the phone because she hadn’t heard and she said, “oh thank you for calling me for my birthday” and I said, “Mom, I’m not calling you for your birthday, something really awful happened.” So, I told her what happened and obviously she was stunned, and interestingly, to this day she doesn’t celebrate her birthday on September 11th, she celebrates it on September 12th, because that day is so horrific for all of us and so tragic. We knew many people who were working in New York City at the time and we knew many people working in the twin towers and of course we didn’t know what happened and, as it turned out, two of my high school classmates died in the twin towers. They worked for this one firm that lost 98% of the people, who were all killed. They were all working on this one floor and that was the floor that was completely destroyed. And I knew their families. So, for this day, whenever I see an image I can’t forget that particular day and how I felt, and also the real concern and fear that we all have, and also not knowing what happened. It was, for me, a really transformational day. I think it was a transformational day for many people in the United States. I think we lost our innocence that day.

Dimitra Molyva: What do you think needs to be done to combat terrorism?

Ambassador Kathleen Doherty: I don’t know, there is no one easy solution. I think that we have all learned that over the last decades. I mean, even before 9/11, there were many ways we tried to address terrorism. I think that one thing that I am proud of, as a New Yorker, to say now is that we are a very resilient people and I think the Parisians who have faced attacks recently and across the world, the one thing that is really important is to be resilient, not to give in to fear, and to go on to live life, but also to remember all those people who lost their lives. On September 11th, for me, it is a particular day of self-reflection and thinking about all that has occurred in the past decades.

Dimitra Molyva: Do you have a message to say?

Ambassador Kathleen Doherty: My message is that we should just remember the lives lost in all terrorist attacks, whether in Istanbul, or New York, or Paris, or London, or in Israel. Across the world people lose their lives in terrorism and it’s a horrible, horrible thing to go through for their families and for their countries and I think we always need to be resilient and remember what’s important. The family bonds, the personal bonds you have with people.