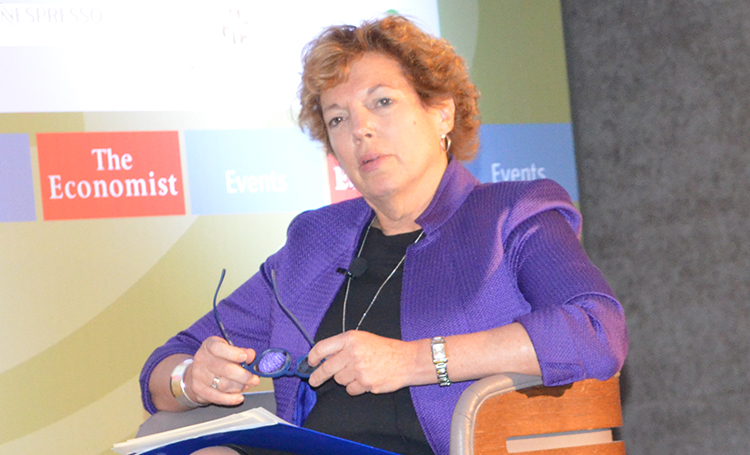 How Is Europe Affected?

I would like to thank John Peet, political editor of the Economist, and the Summit’s organizers, particularly John Georgoulas and his team, for the invitation to speak today.

It’s an honor to share the stage with such distinguished co-panelists as John Bruton, Enrico Letta and Jeremy Browne.

Coincidentally, my father was born in Ireland. I served six years in Italy.  I did my graduate degree in London, and I also served there as a diplomat, so I think I am the epitome of what a Europeanist American is. And I think that is part of the story I want to tell today, because a lot of people when they think about our relationship they think we are separate, but we are not.

70 percent of U.S. citizens trace their ancestry back to Europe.  About 14 million Americans come to Europe every year for tourism and about 8 million Europeans come to the United States for tourism.  And that’s not to mention the millions who work and study at each other’s places. So, our relationship is very deep; it is enduring and it is multifaceted. But it is also primarily based on our democratic values: our belief in democracy, the rule of law, individual rights.  And that’s important to understand because I think we often think about our relationship as a snapshot in time, but it is actually a five-hundred-year-old relationship.

The new administration has also reiterated the importance of our relationship with Europe.  President Trump and Vice President Pence have met with more than a dozen European leaders in their first nine months and they travelled to Europe twice.  And we always believe very strongly that a strong Europe is in all of our national interests.    President Trump  said that “A strong Europe is a blessing to the West and to the world.”

I know that a lot of people have heard about our “America First” Policy and what that means.  And what it does mean is that President Trump and this administration put our prosperity and security first. But it does not mean that “America first” means “America alone.”   President Trump has  said that “our relationship with Europe has been, is now and always will be essential — for we are stronger together than we will ever be apart.”

Now, I will talk a little bit about where we are working together and particularly about our relationship with three countries–Iran, Russia and Turkey–because I know it is probably on many people’s minds here.

First and foremost, we are working together to combat violent extremism. Since 2014, there have been over 150 terrorist attacks plotted or carried out in Europe.  And we believe that it is fundamental that we work together to combat terrorism, as we saw  two days ago in New York. We need to work together to defeat ISIS.  We need to share information about the threats facing both our regions.  We also need to figure out what the cause of the violent extremism is and work together [to eliminate them].  The U.S. and Europe are also working closely to stop nuclear proliferation, to strengthen democracies, to promote rule of law, to combat and discourage terrorism, to provide aid to countries in distress especially those hit by disasters.

So these things stay constant whatever administration is in place.  And we feel very, very strongly that a strong Europe is necessary for all of our national interests.  And I must say hearing what the three speakers said about Brexit , we are also concerned that Europe is not going to be as strong as it has been in the past. And this  is something that is a challenge for all of us.

Now, if you bear with me, I know a lot of people are very interested in the U.S. approach to Iran.   So,  I want to explain what is happening in our approach to Iran, so there is no misunderstanding.

President Trump has decided to decline to provide a certification to the U.S. Congress under the Iran Nuclear Agreement Review Act.  The President’s decision was based upon the requirements of this act, which is U.S. domestic legislation distinct from the Joint Comprehensive Plan of Action – known as JCPOA.  The President concluded that he cannot certify, under this U.S. legislation, that the sanctions relief that was provided to Iran is proportionate to the steps they took under the nuclear deal.

The President has directed the Administration to work with our allies and with Congress to fix the flaws in the JCPOA’s “sunset clause”, to bolster enforcement of the deal, and to correct its omission of constraints on ballistic missiles.

Secretary Tillerson has said: it remains our intent to stay in the JCPOA if we can address the serious flaws of the agreement.  He also said the Trump Administration isn’t seeking to disrupt European business deals with Iran.

But Secretary Tillerson has also stressed – we need to acknowledge and counter Iran’s de-stabilizing influence.  Iran is developing a ballistic missile capability.  Iran supports terrorist groups with weapons and other material assistance. Iran is a global challenge facing all of us.

I also want to talk about Russia.

Our new Ambassador to Russia said in his hearing before the Senate a couple of weeks ago that “our relationship with Russia is among the most consequential and complex foreign-policy challenges we face.  But because the United States and Russia are both nuclear superpowers and permanent members of the UN Security Council, we have to deal with each other for the sake of global stability and security.”

As Ambassador Huntsman has said “Our view remains that Russia continues to violate the sovereignty and territorial integrity of its neighbors….  And that the Russian government interfered in the U.S. election last year, and that Moscow continues to meddle in the democratic processes of our friends….  We also believe that Russia is disregarding its arms-control obligations and commitments.”

“We cannot simply ignore all this.”

We do share some common goals with Russia.  Defeating ISIS is first and foremost and finding a political solution to the situation in Syria is another.

We’ve also said very clearly that our position on sanctions requires Russia to reverse its actions, particularly in Crimea.

We do seek a constructive relationship with Russia based on mutual cooperation and common interests.  Ten years ago I served in Russia as a diplomat and I know we worked together on many economic programs.  We seek to balance these goals with a clear-eyed vision of Russia and we do hope we can move beyond this very low point of trust between our two countries.

Obviously the European Union and the United States have a very challenging relationship with Turkey these days, especially after the failed coup attempt last year—which we condemned.

But, both President Trump and President Erdogan met in September and reaffirmed our strategic relationship and have discussed how to defeat and confront terrorism and some of the causes of regional instability. We firmly believe that Turkey needs to stay anchored in the transatlantic community.

Now, turning to the Cyprus issue, I must say many of us, many Cypriots, many in the U.S. and international community –including myself – were very disappointed in the outcome of the talks this summer.

This is a time for reflection as the UN Secretary General said.

But we believe that so much progress was made during the 2.5 years and that this progress should not be lost.

We also believe that the only finger pointing that should take place is the finger that is pointing to the future, to the best path forward – which is a bi-zonal, bi-communal federation.  We stand ready to support the talks should they resume again.

Lastly, I want to touch briefly on energy, because we are facing a new world in energy.  I know we will talk about it during a different panel.  Let me talk about the role the U.S is playing now.

In February 2016, we exported our first LNG shipment.  And since then, we have shipped over 175 shipments to more than 20 countries, including some in Europe.  We believe that increased supplies of LNG—whether from the United States, Australia, or other countries–Increase global stability, increase global energy security and make any one region less dependent on limited sources of gas.

We are hopeful that there will be some sizable discoveries of gas here in the Eastern Mediterranean, and we believe those discoveries can help increase political stability and can be an incentive for greater partnerships.   We are very supportive of Cyprus-Israel-Greece and the Cyprus – Greece – Egypt relationships that are growing and we encourage those as an anchor for political stability.

Lastly, I want to give my views as a person who has been a diplomat for 28 years and has worked on U.S. and European relations for most of that time.

There has always been a chorus of people who believe that the U.S. European relationship is at its end; that we cannot survive the next crisis in our relationship.  And I think, as in many things, we realize that whenever there is a crisis we always emerge stronger.  We also feel very cognizant that internally in our own countries, there are forces that are trying to pull us apart internally and pull us apart from our friends.  So we need to concentrate on how to strengthen our own democracies but also to recognize all that we have achieved together and all that we will achieve together.

It is very important that the U.S.-European transatlantic relationship remains a pillar for global stability, a force for progress and a force for the good of the future.