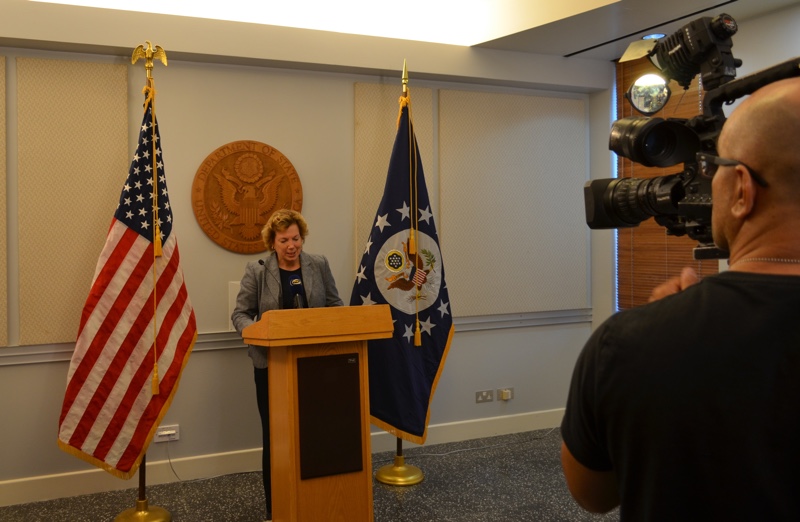 Good morning everyone.  I stayed up all night as I think many of you did.  The night is still continuing, since we don’t have final results; but probably will within an hour or so.  Right now it looks like the presumptive winner will be Donald Trump but we still don’t know, it’s still a little bit too close to call, so I am not going to make any declarations of who is the winner right now. I know no more than you do, watching the news as we talk about it.

But I  want to comment on our process.  If you’ve seen the electoral results in each of the states, all the states were extremely close.  About fifty million people voted for Secretary Clinton, about fifty million people voted for the presumptive president-Donald Trump.  I think this shows how close our system is and how people really are struggling with some of the tough choices we’re facing as a society now.   If you look at the voters—and the exit polling—their concerns are really about jobs, employment, the loss of manufacturing, a lot of those economic issues that so many countries are struggling with right now.  People also just want change.  I think if that people remember when President Obama was elected 8 years ago, he was elected on a platform for change.  I think this is a common refrain; we’re all a little tired of the political processes we’ve seen over the past few years.  So I think right now, we all need to take on the message that people want change and for our r political system to be more responsive to what voters want.

I also believe that whoever the new president is—whether it is Donald Trump or Secretary Clinton—they will lead the nation and will try to heal the divisions.  I think a lot of the campaign rhetoric is just that. I think we will find that the new leader and all those who have been elected will find a way to heal the country.  I do want to reassure you all that the United States is a very robust, resilient democracy, and we continue on a  positive path forward.

So, that’s my formal statement but I am sure you have a few questions for me, so who would like to be the first one?

Q: Actually, [do] you believe that whoever will win, U.S. policy will not change [inaudible]?

AMB:   We like to use the analogy that the United States is like a big aircraft carrier ship that takes forever to turn around. Our political system does not allow itself to change rapidly.  It’s going take a  long time–weeks, months, maybe years–for us to figure out what this election meant and how it gets reflected in policy.  There’s going to be an enormous amount of debate. So, I think you’ll just have to be patient and see what happens.

Q:  It seems that what the American people voted [for] eight years ago—change– brought them the other way around now.

AMB: It’s still change, it’s just a different type of change. And it is often portrayed that those people who supported Donald Trump had prejudices against others.  I think that’s a very small minority of people, if that is even true.  I think most of Donald Trump’s supporters, as you’ve seen by the exit polling, were people who felt that the world had left them behind. And they were most angry about that. So, that’s what we have to address, as do political leaders in any country, we have to worry about the people who feel left behind.

Q: How would you say the result of today’s election may affect U.S. – EU relations?

Q: Do you think there will be any shift in policy on matters like the UN convention on the rights of children, closing down Guantanamo bay, or other such issues which were pivotal in President Obama’s campaign?

Q: So, this is hypothetical?

AMB: Everything is hypothetical.  I mean I would assume we’ll have the result in an hour, but even some of these states that are really close could go through the process of recounting everything, as it was in the year 2000.  So, I assume that we will have resolution today, but if it is too close to call, there are procedures in place to lead to an eventual resolution.

Q:  So, would you say that the United States in its electoral process followed a global trend whereby people expressed their dissatisfaction with the consequences of globalization?

AMB: I think so, and if you really start looking at the numbers there seems to be a divide between rural voters, suburban voters, and urban voters; west coast, east coast, and the middle states, and between those who really felt they were the ones being left behind by globalization and those who don’t. And I think we all face that challenge, people face it in Europe, people face it in the United States, and I don’t feel that anyone should feel that what happened in the United States is a reflection of something unique in the United States, we are all facing this challenge.

Q: Have you any idea how women voters have voted?

AMB:  Not any more than you’ve seen (laughter).  It seems that more women supported Secretary Clinton, but not as many as people anticipated, but then you know, I think we will be getting a lot of the raw data in the next few weeks. And so, I, like you, watched all night and I don’t know all the different voting patterns.  And I guess we’ll see in an hour or so, maybe not.  Thank you for coming, I wish I had a more definitive statement to make, but I think we’ll… The results are coming in and we’ll move forward.  Thank you very much.