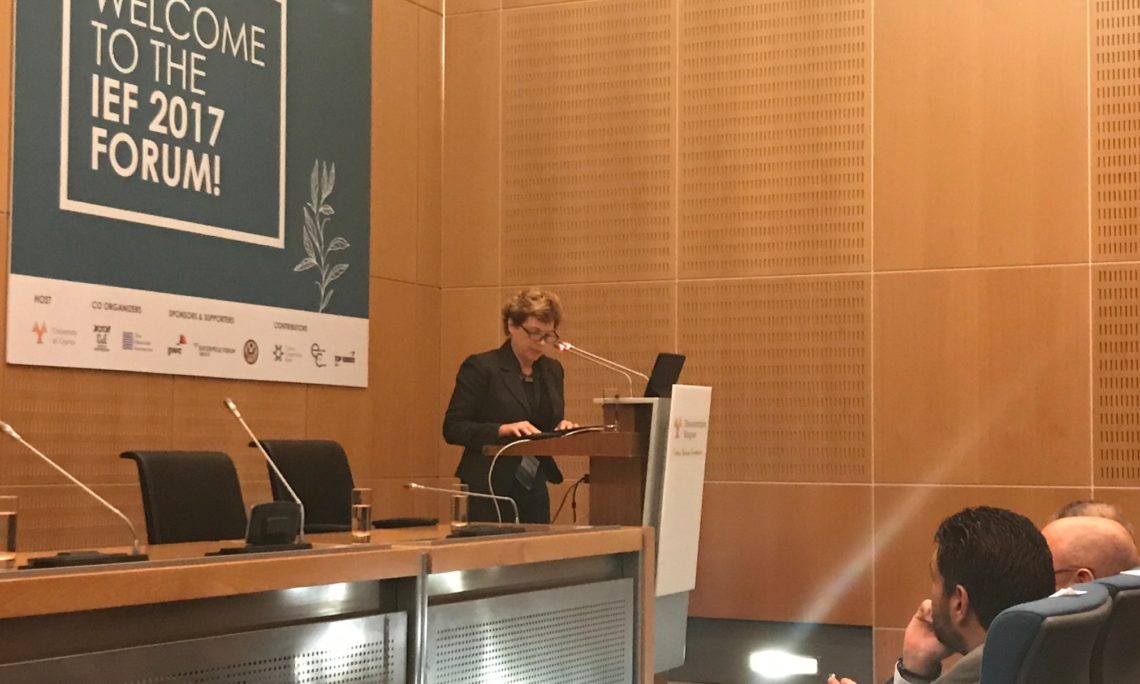 It is great to be here at the University of Cyprus today.

I’d like to give recognition to my good friend Rector Christofides for hosting the event and the other local sponsors for supporting it.  I am particularly glad to see the Hellenic Initiative taking an active role in Cyprus—their important work in Greece is well-known.

Many people think they’ll strike it rich if they can just come up with the right idea. The truth is that there’s no shortage of great ideas in the world. But very few people will know what to do to turn that idea into reality.

Larry Page, one of the founders of Google, said in a 2008 interview, that one of his greatest heroes was Nikola Tesla, the polymath Serbian American, whose experiments 150 years or so ago led to dozens of breakthroughs in the production, transmission and application of electric power.  Page noted, however, that Tesla, despite his brilliance, couldn’t commercialize his findings, that he couldn’t find funding for his own research, and barely made enough to live on.  Page argued that an inventor needs to be more like Thomas Edison, Tesla’s chief rival, and get your invention into the market, and make money from it.  In other words, Edison knew how to commercialize an innovation.

Whether you are talking about Thomas Edison 150 years ago, Steve Jobs forty years ago, Elon Musk today, and the countless number of innovators around the world, the individuals most likely to succeed are those who are creative, flexible, unafraid of failure, and able to turn their ideas into something tangible – and something that has value.

But most of these individuals also benefitted from a network of support.  In some cases, funding from families and friends made the difference; in others, having the right mentor or advisor, or a laboratory in which to experiment, or a business partner that took a risk and introduced the product into the market.

In the United States, our universities, often in partnership with the private sector and government, often offer these types of support.

In the United States, one of our greatest strengths is the university system, with more than 4000 institutions of higher learning.  In one recent ranking of universities worldwide, 15 of the top 17, 28 of the top 33, and 34 of the top 40 were American.  No other country is close.

As you will hear shortly from Dr. Sandler, partnerships among universities, innovators, the private sector and government can offer extraordinary platforms for the creation of new products, new companies, and even new industries.

Also important is the type of regulatory, legislative and business environment that exists.  Countries that excel in innovation have figured out what works best for their own local conditions.

And which countries stand out?  In 2015, Bloomberg looked at the top 50 most innovative countries, and rated them based on the follow considerations: research and development funding, personnel and activity; value-added by manufacturing; high tech sector results; post-secondary education; and patents. The top five countries, according to the Bloomberg Index, are South Korea, Japan, Germany, Finland, Israel and the United States.

What the Bloomberg ranking didn’t take into account was a hard-to-quantity influence, government regulation. In the top five countries, the types of regulatory and legislative environments are clearly different.

I hope that today you will identify ways to strengthen the conditions on the ground that will help make Cyprus an innovative product and services development center.

I also hope to see even greater partnerships between U.S. universities and private sector with their Cypriot counterparts. With thousands of Cypriots graduates of U.S. universities, many under the CASP or Fulbright programs, the potential links already are there.  And with more American companies doing business here in Cyprus, the opportunities are growing for such partnerships.