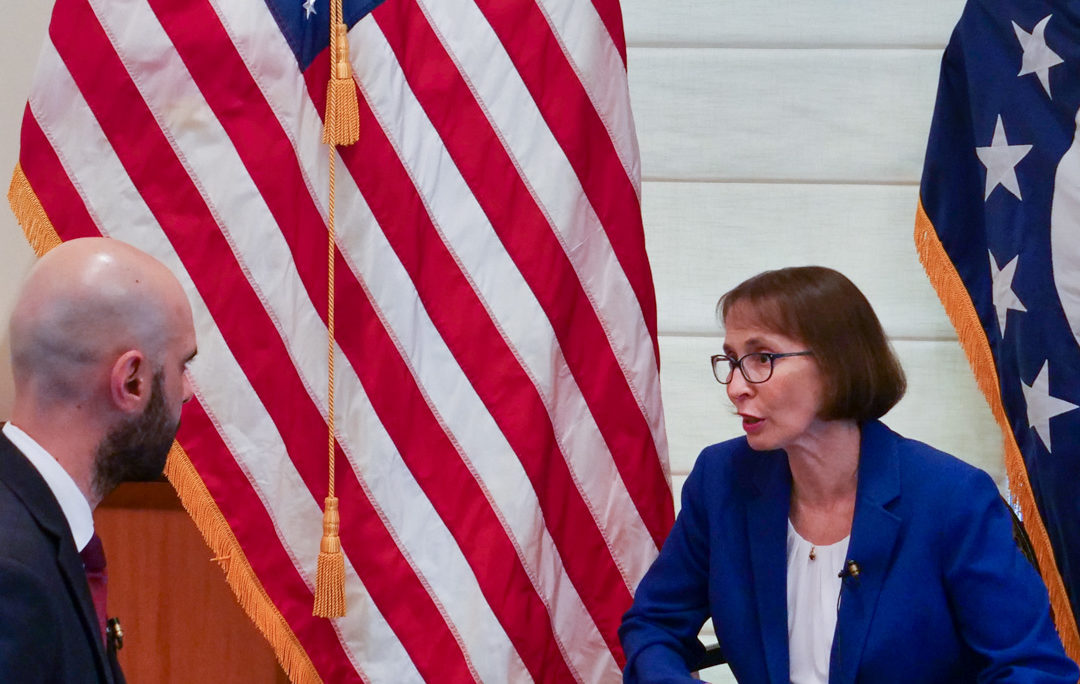 Athanasiou: It seems that Ankara does not take suggestions into consideration regarding Turkish provocations in Cyprus’ EEZ.

Ambassador Garber: The U.S. position is clear.  The U.S. recognizes the right of the Republic of Cyprus to explore in its Exclusive Economic Zone.  We also believe that that the profits from these resources should be equitably shared between the two communities in the framework of a comprehensive settlement of the Cyprus problem.  With regard to the recent Turkish drilling activities, a statement has been issued by the State Department spokesperson on July 9, expressing the U.S. deep concern for these repeated Turkish activities in waters off Cyprus.  We have called on Turkish authorities to halt these operations. We are also asking all parties to act with restraint and refrain from any activities that would continue to increase these tensions.

Athanasiou: Is the U.S. determined to defend the rights of American companies which operate in the region such as ExxonMobil?

Ambassador Garber:  Surely, the U.S. supports ExxonMobil’s activities, here in the Republic of Cyprus’ EEZ.  We consider it very important not to increase the tension and what any company is looking for in order to be able to move forward with its investments is greater stability and security.  For this reason, we call on all parties to act with restraint and to abstain from actions that increase tension.  And this is the framework of our policy.

Athanasiou: Can you clarify the phrase “claimed by the Republic of Cyprus?”

Ambassador Garber: The Republic of Cyprus claims a specific region as its own EEZ and that’s exactly how we refer to it.

Athanasiou: However, “claimed” simply means that Cyprus claims it.  In this case, in your opinion, is it simply “claimed by Cyprus” or is it Cyprus’ EEZ?  This is where the misunderstanding is.

Ambassador Garber:  I do not think there is a misunderstanding.  We respect the rights of the Republic of Cyprus to develop its resources in its EEZ.

Athanasiou: The Republic of Cyprus has called on Turkey to delineate the sea boundaries between the two countries.  It is something that the EU also supports.  Do you consider this feasible, and that Turkey should respond positively?

Ambassador Garber: Certainly, the lack of sea boundaries is something that contributes to the increase of tension.  I believe that the key in this case is that the U.S. recognizes the right of the Republic of Cyprus to develop its energy resources.

Athanasiou: Are there any U.S. initiative to push the process for the solution of the Cyprus problem?

Ambassador Garber: The U.S. is very supportive of the Cypriot-led process, facilitated by the UN, for a lasting settlement of the Cyprus problem, to reunite the island based on a biozonal, bicommunal Federation.  We continue to be supportive and we very much hope that the negotiations will resume soon.

Athanasiou: Do you believe that Cyprus should apply to join NATO?

Ambassador Garber: It is up to the Republic of Cyprus to decide.

Athanasiou: Would such a development mean something in the bilateral relations between the U.S. and Cyprus?

Ambassador Garber: The bill is what the word says, a bill, and it would be premature to comment because we do not know what the final form will be, or if it will pass.  However, what I wanted to say is that such a bill should not be a surprise, given that some Russian activities in the Eastern Mediterranean and especially in Syria have caught the attention of our lawmakers, who would call for specific measures.

Athanasiou: Are you concerned by the increase of Russian influence in the Eastern Mediterranean through Turkey?

Ambassador Garber: The U.S. has expressed concerns regarding Russia’s activities in the Eastern Mediterranean.  Especially regarding Syria, we haven’t seen [Russia] play a constructive role in this area, and it is certainly a fundamental concern for us.

Athanasiou: Turkey is left out of the F-35 program.  What are the consequences in the U.S.-Turkey relations?

Ambassador Garber: The U.S. wishes for a constructive relationship with Turkey.  Especially with regards to the decision for the S-400s and the consequences for that decision, we do not talk about procedures before they are completed.  I know that this does not make headlines in the media, but usually we do not announce publicly our decisions for sanctions before they are completed.

Athanasiou: Do you believe that Turkey is abandoning the West?

Ambassador Garber: I think is very important for the U.S. to work and keep Turkey committed to the western institutions and in a western orientation.  Turkey remains a NATO ally.

Athanasiou: The U.S. and Cyprus cooperate in economic fields as well.

Ambassador Garber:  We are partners with the Republic of Cyprus in trying to combat anti-money laundering.  And we are very impressed by the steps that Cyprus has made and we look to continue to cooperate on fighting money laundering.  It is very important for the development of the Cypriot economy for the message to be sent that Cyprus is not open for this kind of business.  The relations between the U.S. and Cyprus are really strengthened in many fields.  All these are unbelievably positive developments for our bilateral relations and we want to develop our economic relations.  We are also looking to deepen our economic partnership.  This has been led by ExxonMobil and Noble Energy, which are here participating in the energy developments that are so exciting here in the Republic of Cyprus, but there are many areas we believe we can take this economic cooperation.

Athanasiou: Is there a message you want to send to the Cypriot side?

Ambassador Garber: The U.S. really expects the deepening of our bilateral relations with the Republic of Cyprus.  The sky seems to be the limit in relation to the ways we can cooperate.  Some of the new fields we are working on are so exciting.  We are also very supportive and helpful in the Cypriot led process for the solution of the Cyprus problem.

Athanasiou: And now some personal questions.  What is the first thing that comes to your mind when you hear the word “Cyprus”?

Ambassador Garber: I believe the sun, sunshine, and good weather.  It is a beautiful island and the people here are very hospitable.  The other thing that impresses me is that anywhere I went, either to a village, or to a ministry, I always see a U.S.-Cyprus link.  It is fantastic to discover that it is either an uncle who lives in New Jersey, or someone who studies in a U.S. university, or students who work on some archaeology program of an American university.  It shows how strong the ties between the two countries are.  And as an Ambassador I will work for the further development of our cooperation.

Ambassador Garber: Or Hollywood.  Not simply watching movies, now we are making Hollywood movies here in Cyprus.  Nicolas Cage came here for the movie “Jiu Jitsu.”  Even Hollywood too, Yes.

Athanasiou: Have you visited places?

Ambassador Garber: I visited some places, but not as many as I would like.  I visited Troodos and some churches, villages; I went to some of the beautiful beaches.  There are so many things that I have to do and discover.