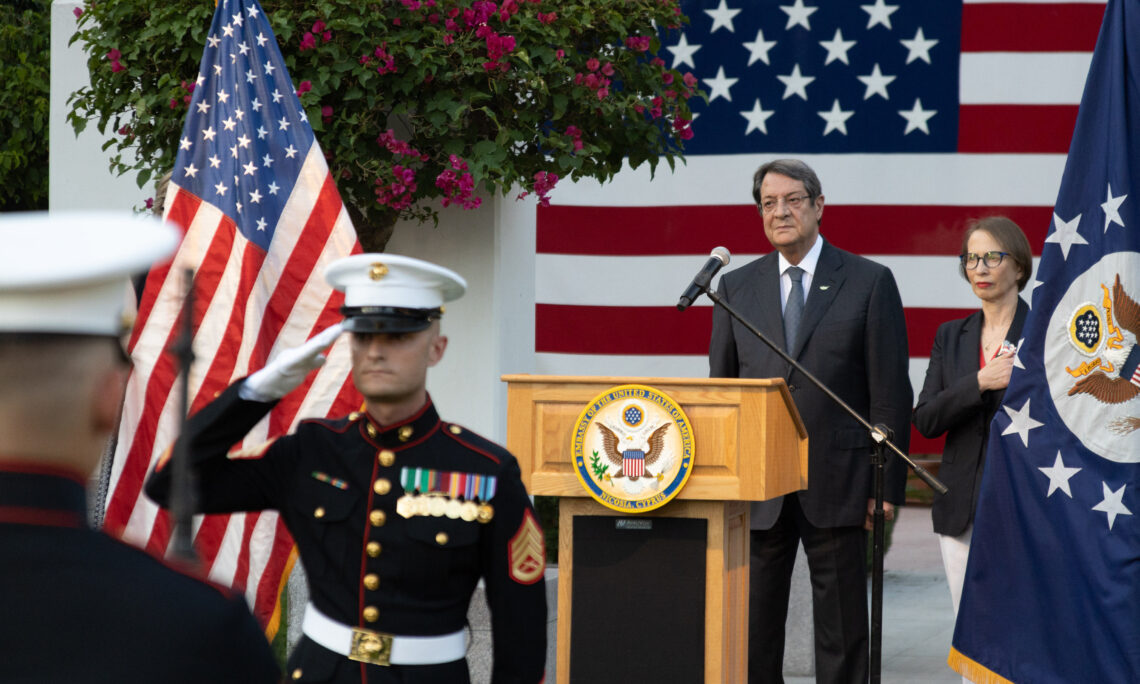 Mister President, Ministers, Excellencies, Ladies and Gentlemen – Good evening, welcome, and thank you all for joining us tonight to celebrate the 245th anniversary of America’s Declaration of Independence.

I particularly want to thank the President and members of the government for making the time to be with us tonight, so soon after the devastating fires in Larnaca and Limassol. Our hearts go out to the friends and families of those who died, and to all who lost their homes. I wish also to thank all the first responders who worked to contain the fire, from Cyprus, the UK, Greece and Israel.

We often call July 4th America’s birthday. In truth, when our Continental Congress voted for Independence and ratified the Declaration of Independence on July 4, 1776, it was a crucial step in the process of our nation’s birth, but it was neither the first step nor the last. The process of gaining our independence began much earlier and didn’t end until the Treaty of Paris was signed in 1783.

Just as the original Fourth of July came about as a result of many prior victories, the celebration tonight of our strong bilateral relationship is based on more than 60 years of U.S.- Cyprus friendship and the milestones we have reached during that time.

2021 marks the 60th anniversary of the inauguration of President Kennedy. Sixty years on, President Kennedy continues to be a symbol to Americans and others around the world of youthful energy, positivity, and optimism. He was the youngest person ever elected to the U.S. Presidency. He inspired a generation.

One of President Kennedy’s signature programs was the Peace Corps, which 60 years later still gives Americans the opportunity to immerse themselves in a new culture and provide services to people in need. The Peace Corps has sent almost a quarter of a million volunteers to 142 countries, including a team to Cyprus in 1962. The Peace Corps remains a symbol of American generosity and an ongoing memorial to the vision of its founding president.

John Kennedy also inspired a generation of scientists, mathematicians, and engineers with his dreams of space flight.
President Kennedy is also admired for his dedication to improving civil rights and race relations in the United States. These are just some of the reasons President Kennedy still inspires Americans today, despite his tragically short time in office.

President Kennedy has also been admired by the people of Cyprus. Kennedy was campaigning for office when the modern state of Cyprus was created and was president during its formative years. In preparing for this year’s celebration of American independence, we did a little research about Cypriot tributes to Kennedy. I am sure many of you have visited Kennedy Street here in Nicosia or in Limassol. But we learned that there are at least 17 different streets and squares across the island named after our 35th president. Once we discovered that, we knew there was no better theme for celebrating American-Cypriot cooperation and displaying our optimism for the future of our relations with Cyprus than by marking the anniversary of his inauguration.

Over the last year and a half, thru lockdowns, restrictions, PCR tests and vaccines, we have all drawn on our Kennedy-esque belief that better days lie ahead, and that hard work, cooperation, and putting our faith and our resources in science and technology would lead to a better future. The people of Cyprus have done a remarkable job of protecting themselves and all of us who live here from the worst effects of the coronavirus. The United States was proud to support those efforts through multiple donations of medical supplies and equipment to the Republic of Cyprus.

Throughout this pandemic year, we were able to maintain the momentum building in our relationship. For the first time, we sent members of the Republic of Cyprus National Guard to the United States to study at our defense schools, funded by the International Military Education and Training program. We announced the waiver of some defense trade restrictions last summer; allowing the purchase of non-lethal equipment will help protect the people of this island against transnational threats and strengthen our security and commercial ties.

In the economic and commercial arena, our countries have continued to find ways to build on our strong trade and investment ties. The United States recognizes the right of the Republic of Cyprus to develop the resources in its Exclusive Economic Zone and believes the island’s oil and gas resources should be shared equitably between both communities. We are proud that two of our leading energy companies continue to invest in Cyprus as a partner in the development of Cyprus’s natural gas resources. U.S. investment management firm PIMCO has made major new investments in the Cypriot financial sector. And U.S. companies are increasingly pursuing, and winning, projects here in Cyprus such as Conduent for traffic cameras and TCI for spectrum monitoring. These deals are the foundation on which future business investments are made.

We have also seen a significant increase in the number of young Cypriot students applying to American universities and colleges. This year, Cypriots have earned more than $3,000,000 in scholarships to U.S. colleges and universities.

This past year we saw a number of important high-level visits to the island, including two cabinet secretaries and two Under Secretaries, advancing our foreign policy discussions and cooperation on issues ranging from security to immigration and travel. We broke ground for the CYCLOPS center, a U.S. funded regional training facility for countries in the Eastern Mediterranean and beyond seeking to promote security on land, at sea and in port.

Importantly, we strongly support the efforts facilitated by the United Nations to resume formal negotiations for settling the Cyprus problem. In the same spirit of optimism that characterized the Kennedy Administration, the Biden administration is committed to supporting a Cypriot-led, UN-facilitated effort to reunify Cyprus as a bizonal, bicommunal federation. President Biden remains convinced not only that a solution is possible, but that a reunited island would benefit all Cypriots and the wider region.

In one of his last public proclamations, President John Kennedy wrote “As we express our gratitude, we must never forget that the highest appreciation is not to utter words, but to live by them.”

I want to express my gratitude for everything that our partners across the island in government, civil society and the business community have done over the last year to deepen the partnership between the United States and Cyprus.

As we continue to move towards a post-pandemic world, I am looking forward to even more cultural, political, economic and security engagement.

We are just getting started and there is so much more we can do together.

Mr. President, I invite you now to say a few words.