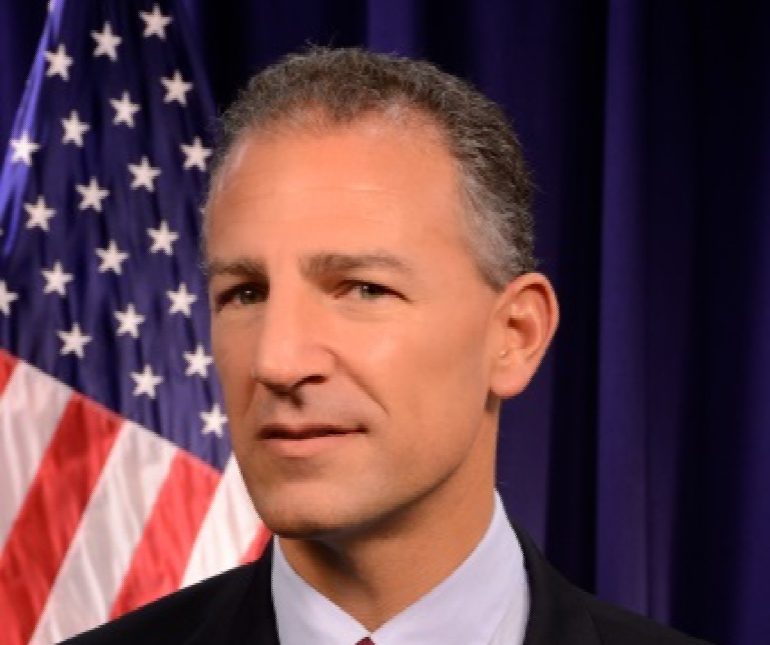 Thank you, Nicholas.  Mr. President, ministers, Ambassadors, ladies and gentlemen, friends, good afternoon.  It is a pleasure to be here and a particular honor to share the stage with President Anastasiades.  I would like to thank the organizers of Capital Link for hosting this forum and including me.  I would also like to thank and welcome our friends from the Republic of Cyprus who are here with us today – President Anastasiades, Ministers Lakkotrypis, Georgiades, and Demetriades, and Spokesperson Christodoulides, business leaders, and investment experts.  We are thrilled to have you here at this exceptional gathering as we discuss ways to attract greater investment to Cyprus.  As was so kindly noted when I was introduced, I have served in Cyprus and in the broader region for much of my career, I invested my time in Cyprus in building U.S.-Cyprus relations including business links, and I have deep attachment to Cyprus and fond memories of my time on the island.  I also have a great sense of hope for the future of Cyprus and the Eastern Mediterranean.  It is great to see so many old friends here today – and how far you and we have come.  In 2008, we tried hard to get U.S. investors interested in Cyprus, and focused on small-to-medium investments and franchises.  Look now at ExxonMobil, Hard Rock, and the banks.  I was especially pleased at the role of U.S. companies in Cyprus’ economic bounce back.

Cyprus is an island of proven ability and yet remains an island of unrealized potential.  We agree there are promising current opportunities, including in tourism, technology, shipping, and energy.  Cyprus could be the Singapore of the Mediterranean but to realize its full potential, it needs the stable, peaceful, and integrated environment on all sides that only reunification can provide.  A reunified Cyprus could give investors opportunities to help redevelop Varosha, old Nicosia, and the buffer zone, as well as major infrastructure projects like expanding ports and airports, and reconnecting roads, electricity grids, and telecommunications lines.

The Republic of Cyprus is a valued friend and strategic partner to the United States.  Cyprus is a member of the Counter-ISIS Coalition, and Foreign Minister Kasoulides is in Washington today for the Counter-ISIS Ministerial and had an excellent meeting yesterday with Under Secretary of State Tom Shannon and myself.  The United States appreciates Cyprus’ contributions to bring stability to its region.  In recent years we have worked to increase our substantive bilateral cooperation with Cyprus, particularly in the areas of counterterrorism, non-proliferation, and maritime and border security.  We have provided counterterrorism training and training on explosive ordnance disposal and stockpile management to Cypriot officials.  Cyprus is a partner in the Proliferation Security Initiative, a global effort to prevent the trafficking of weapons of mass destruction, delivery systems, and related materials.  And Cyprus continues to participate in the Department of State-led Export Control and Related Border Security Program as a “graduate partner,” hosting regional trainings for partner countries in the Eastern Mediterranean.  These are just a few examples of the areas where we are working to strengthen our bilateral security relationship with Cyprus, and we will continue to look for mutually beneficial ways to enhance cooperation.

Cyprus has also worked to build its relationships with key regional partners, including through promoting trilateral cooperation with Greece and partners in Israel, Egypt, Jordan, and Lebanon in areas like energy, resource management, environmental protection, humanitarian assistance, counterterrorism, and crisis response.

As a friend and partner of Cyprus, the United States wants to see Cyprus succeed.  Economic prosperity in Cyprus benefits not just the people of the island but the wider region, and it is in the interests of Europe and the United States to support Cyprus’ efforts to become a stable, thriving economic hub and attract greater investment to its shores.  The 2013 bailout and subsequent austerity measures were difficult for the Cypriot people, but through the government’s leadership, the economy has come out of its crisis stronger and has returned to growth.  We commend the efforts the Republic of Cyprus has taken in recent years to improve the business climate and attract greater investment.  Still, more can be done to continue increasing investor confidence and strengthening the legal and regulatory framework of the island.  There is perhaps no contribution greater than reunification to spur investment, and we urge those here, as well as the Turkish Cypriots, and the other parties to redouble their efforts to achieve a solution.  I will return to this theme in a moment.

Cyprus’ liberal investment climate, skilled workforce, comparatively low labor costs, and its recently discovered offshore energy potential, make it an especially attractive destination for U.S. investors.  According to the Department of Commerce’s Bureau of Economic Analysis, in 2015, outward U.S. direct investment in Cyprus was valued at $2 billion, with direct investment from Cyprus in the United States at $2.5 billion.  Prominent U.S. investors, including some here today, have injected hundreds of millions of dollars into the Cypriot banking sector.  The Hard Rock International/Melco consortium recently won a tender to build an integrated casino resort and conference center, a project estimated to be worth up to $500 million.  And key U.S. companies continue opening franchises in Cyprus, including most recently Taco Bell.

Additionally, American companies are playing an increasingly central role in the energy sector.  Houston-based Noble Energy and its partners, the operators of the Aphrodite gas field, have invested more than $350 million.  They continue to work with government officials to complete their development plan.  Houston-based Tiger Offshore has expanded its footprint in the region, and General Electric is supporting the Electricity Authority’s efforts to diversify the island’s energy mix.  And of course we were delighted by ExxonMobil’s decision to place a highly competitive bid for Block 10 in Cyprus’ Exclusive Economic Zone.  We welcomed the news of the government’s decision to invite them to negotiate and finalize a contract and look forward to the contract signing in early April.

The gas discoveries in the Eastern Mediterranean are important because, if developed strategically, they can better connect and integrate the region.  They can reduce the dependence of individual countries on single sources of energy and lead to increased economic and political cooperation.  The resulting prosperity has the potential to strengthen the energy security of countries throughout Europe while bringing much-needed stability and increased prosperity to the Eastern Mediterranean region.

In addition to Cypriot gas, it is not hard to imagine a future for the Eastern Mediterranean that includes pipelines connecting Israel’s offshore resources to Jordan, Egypt, Turkey, and the Palestinian Authority, with many running through Cyprus’ Exclusive Economic Zone.  Of course this vision also foresees Cypriot exports to regional partners, including Turkey, as well as to European markets.

Cyprus’ ability to attract investment and enhance regional energy cooperation would be significantly bolstered by reunification.  International investors will see more and bigger opportunities in a reunified Cyprus, and their investment would improve the economic well-being of all the people of the island.  Young Cypriots deserve the economic and other opportunities this scenario would bring.  After a settlement, Cyprus could also serve as a greater center of innovation and technology and as a more effective hub for companies to access markets in the Eastern Mediterranean including Turkey, the Middle East, North Africa, and Europe.  The private sector is already mobilizing capital to put resources behind a settlement.  Just two weeks ago the Atlantic Council, Concordia, and One Cyprus Now hosted a conference in Washington to discuss the potential investment opportunities a settlement would bring.  We intend to continue encouraging efforts, like today’s conference and the Atlantic Council session, to further develop valuable support for a settlement from the U.S. private sector and to encourage further U.S.  investment in Cyprus.

As for the U.S. government, we remain strong in our support for a solution, in part because we believe a reunified Cyprus would serve as an engine to spread stability and prosperity, enabling regional partnerships that have long proven elusive.  It would be a model for others in search of a peaceful, multiethnic future.  A settlement would reduce tensions between NATO Allies Greece and Turkey.  And it would improve coordination between the EU and NATO, long stymied by the division of the island.

For these reasons and more, the United States remains strongly supportive of the UN-facilitated, Cypriot-led settlement process to reunify Cyprus as a bizonal, bicommunal federation.  We believe a reunified Cyprus would generate economic prosperity, growth, and investment, improve regional security, and open up economic, security, and political possibilities that have been limited or shut for more than 40 years.  Those developments are in America’s interest, and that does not change with the change of administration.  Indeed U.S. engagement for a solution continues under the new U.S. administration and has intensified in the last month.  Secretary of State Tillerson has made phone calls both to President Anastasiades and Turkish Cypriot leader Akinci to convey our support.  In recent State Department and White House meetings, senior U.S. officials reiterated their commitment and support to UN Special Advisor Eide and underscored U.S. backing for the Cyprus settlement negotiations in the very first State Department press conference under the new administration.  We will continue doing our part on behalf of the Cypriot-led efforts toward achieving an agreement and stand ready to assist the Cypriot leaders in any way they would find helpful.

We have also redoubled our efforts to connect with key stakeholders here in United States, including the Hellenic American diaspora.  I recently attended events hosted by the American Hellenic Institute and the Hellenic American Leadership Council, and U.S. Ambassador to Cyprus Kathleen Doherty met just last week with key community leaders here in New York and in Washington.  Your continued economic and political engagement with Cyprus is important; we value our partnership with you and continue to benefit from your input.  So thank you for your engagement.

I have been watching Cyprus hopefully and closely throughout my thirty-year career, and I believe that, despite recent setbacks, the prospects for a solution are the best they have been in decades.  This has been a Cypriot-led undertaking from the start with more exceptional, pragmatic individuals leading and engaged in the process on all sides than ever before.  The United States will continue to offer the two leaders our support as they try to bring together the Cypriot people and bring an end to the long-standing division of the island.  And we will continue to encourage and, where appropriate, facilitate U.S. investment in Cyprus.  I hope prospective investors will take a very good look at the opportunities available in Cyprus today and the ever greater ones the prospect of a solution suggests.  There is a unique window of opportunity to achieve an historic political breakthrough with enormous economic dividends.  This window will not remain open forever, and it is the hope of the United States that the leaders can seize the opportunity in the weeks and months ahead to realize their shared vision.  We wish them good fortune and enduring success.  Efharisto poly, thank you very much.