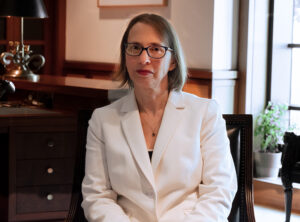 Op-Ed by Ambassador Garber, as published in Phileleftheros newspaper on December 27, 2020

It is a time-honored tradition at this time of year to look back and remember the achievements and challenges of the passing year as we also look forward to the coming year. Last year at this time, none of us could foresee the enormous challenges and losses that 2020 would bring. Nevertheless, the overall theme of what I wrote last year is as true today as it was then: the United States sees the Republic of Cyprus as a valued partner and friend with whom we share the values of democracy, human rights, and the rule of law.

Because of those long-held shared valued and mutual interests, Americans and Cypriots found many ways to cooperate and connect in 2020 amidst the global pandemic. Nowhere was that cooperation more important than in fighting the virus itself. Globally, the U.S. government has made more than 20 billion dollars available for fighting COVID-19. Here in Cyprus, I was proud to oversee U.S. provision of thousands of masks and other pieces of personal protective equipment for use by health care workers at four public hospitals. As Europe and the United States start immunizing their populations over the next few months, I expect that we will continue to see close cooperation on dealing with the public health aspects of this highly infectious disease.

The lockdowns and other restrictions demanded by the increasing numbers of COVID cases have placed heavy economic and social burdens on the United States and the Republic of Cyprus this year. In 2021, we are looking at ways of improving our bilateral trade and investment. Both government and private sector partners are looking at ways to build upon successful agreements reached with American companies in 2020, and upon the close ties we have in industries from banking and services to hydrocarbons and film production.

The high value Americans and Cypriots both place on higher education is another core value we share. Recently, we had a high number of students in Cyprus register to take the SATs, a standardized exam for use in evaluating students wishing to attend American colleges. Our EducationUSA is assisting a record number of applicants navigate their way through the system of applying to a broad range of U.S. universities. In the spring, I hope to see many of these bright young Cypriots studying in America. They are the latest in a long line of Cypriot leaders who have come to the U.S. for higher education, and used what they learned to serve their communities and country back home. When Secretary Pompeo visited in September, the United States signed an agreement to continue and improve our bilateral and regional cooperation on counterterrorism and port security. In 2021, we expect to see the first exchanges get underway under the International Military Education and Training program, as well as some of the first purchases of commercial non-lethal U.S. defense articles.

The United States continues to support efforts to resolve the longstanding division of Cyprus. I remain optimistic that the parties involved, with the support of the UN, will find a way to resume their talks and look for ways to create a peaceful and stable bizonal bicommunal federation. In the long term, the most important event that could improve security in the Eastern Mediterranean is a solution to the Cyprus problem.

This past year we built significantly on the strong foundation of our long-term mutual interests. Following the outcome of our elections in November, I expect that we will see enormous continuity in our bilateral relationship. There is broad bipartisan support in the United States for our engagement in the Eastern Mediterranean region, for the development of hydrocarbons in order to benefits all communities in Cyprus, for combatting the malign influence of Russia, China and other states that seek instability, and combatting transnational crime and terrorism by enacting and enforcing tough anti-money laundering standards.

The celebrations we traditionally hold at this time of year focus on light. It is the time when long ago, people knew that days had stopped growing shorter, and while many hard months of winter might lie ahead, each new day would bring a few more minutes of light into their lives. The numbers of new COVID cases in the U.S. and Cyprus tell us that there are still months ahead of hard work, sacrifice, and precautionary measures for all of us. But I firmly believe that we have turned the corner, and as millions of people are able to access vaccines in the coming months, we will have much more cause to celebrate than to mourn. I look forward to a year in which we conquer this virus, and being able to celebrate with joy and abundance next December.