Home Home | News & Events | Joint Statement on the Ministerial Meeting of the U.S., Greece, Republic of Cyprus, and Israel Regarding Cooperation in the Field of Energy 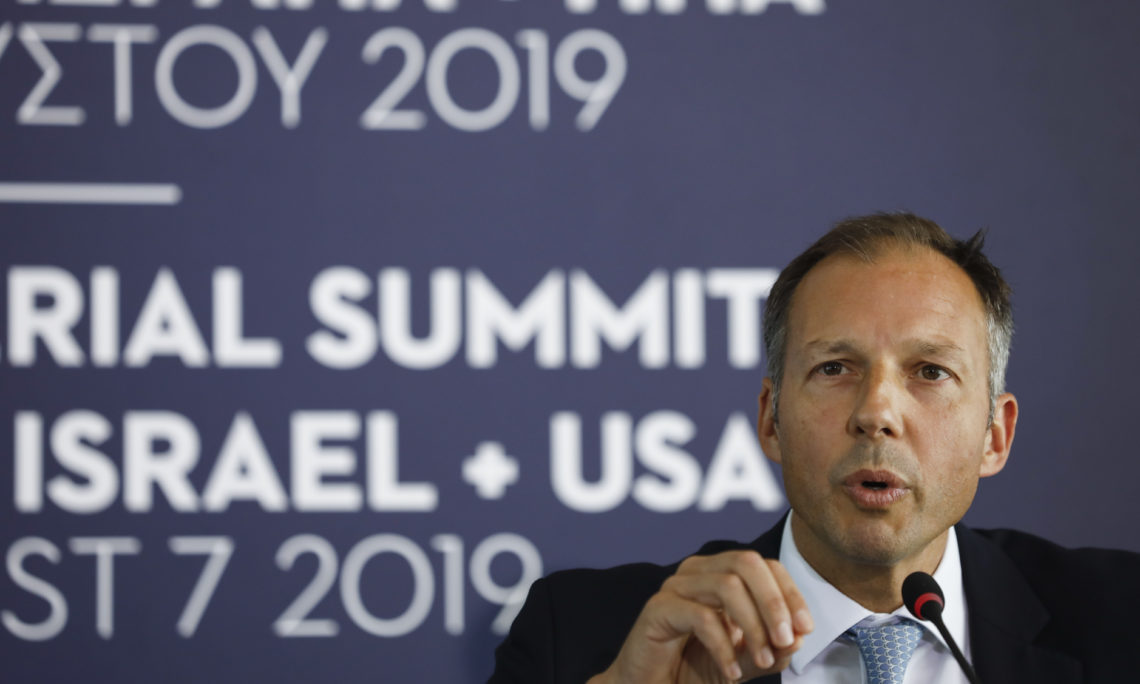 U.S. Assistant Secretary of State of Energy Francis Fannon, speaks during a summit in Athens, Wednesday, Aug. 7, 2019. Energy ministers from Greece, Cyprus, Israel and the United States say they have been deepening their cooperation in the energy sector, noting that while energy issues can create re

MEDIA NOTE
OFFICE OF THE SPOKESPERSON

The text of the following statement was released by the governments of the United States of America, the Hellenic Republic, the Republic of Cyprus, and the State of Israel regarding cooperation in the field of energy.

“The Energy Ministers of the Hellenic Republic, Kostas Hatzidakis, the Republic of Cyprus, Georgios Lakkotrypis, the State of Israel, Yuval Steinitz and the Assistant Secretary of State for Energy Resources of the United States of America, Francis Fannon, met today in Athens regarding cooperation in the field of energy, while affirming their shared commitment to promote peace, stability, security, and prosperity in the Eastern Mediterranean region.

Mr. Fannon underlined the increasing and tangible support of the US government for the establishment of a structured quadrilateral mechanism for cooperation that focuses on energy matters.

The Ministers and the United States identified several significant areas of common interest, including, inter alia, infrastructure projects, renewable energy and energy storage, emergency preparedness, environmental protection and cyber security, while agreeing to establish a High Level Working Group (HLWG) that will highlight specific energy projects and propose ways of promoting their implementation.  The Ministers have agreed to work towards signing an agreement for a joint emergency preparedness and response mechanism for offshore oil and gas operations.  The HLWG will report its progress to the Ministers of Energy on a regular basis.

The Ministers and the United States agreed to support their countries’ energy independence and the establishment of an Energy Corridor of the Eastern Mediterranean, contributing thus to the energy security of the European Union by actively promoting the diversification of import sources and routes.

The Ministers and the United States reiterated their full support and solidarity for the Republic of Cyprus in exploring and developing its resources in its Exclusive Economic Zone and express their concern with recent provocative steps underway in the Eastern Mediterranean.  The United States also reaffirmed its position that the island’s oil and gas resources should be shared equitably between both communities in the context of an overall settlement.

The Ministers expressed strong support for sovereign states’ rights in order not to endanger peace and stability in the Eastern Mediterranean and the Aegean Sea.

The Energy Ministers of the Hellenic Republic, the Republic of Cyprus and the State of Israel, reaffirmed the support of their countries for the implementation of the East Med gas pipeline, a project of major significance for the energy security of the European Union, that also establishes a strategic link between Europe and Israel.

The Ministers recalled that the relevant Intergovernmental Agreement, has been finalized by Greece, Cyprus, Israel and Italy in December 2018 and approved by the European Commission in February 2019 and shall be signed at the earliest possible convenience by all interested parties.”

For further information, contact Donald Kilburg, Spokesperson for the Bureau of Energy Resources, at KilburgDF@america.gov or visit www.state.gov/e/enr.  Additional information is available on Twitter at @EnergyAtState.