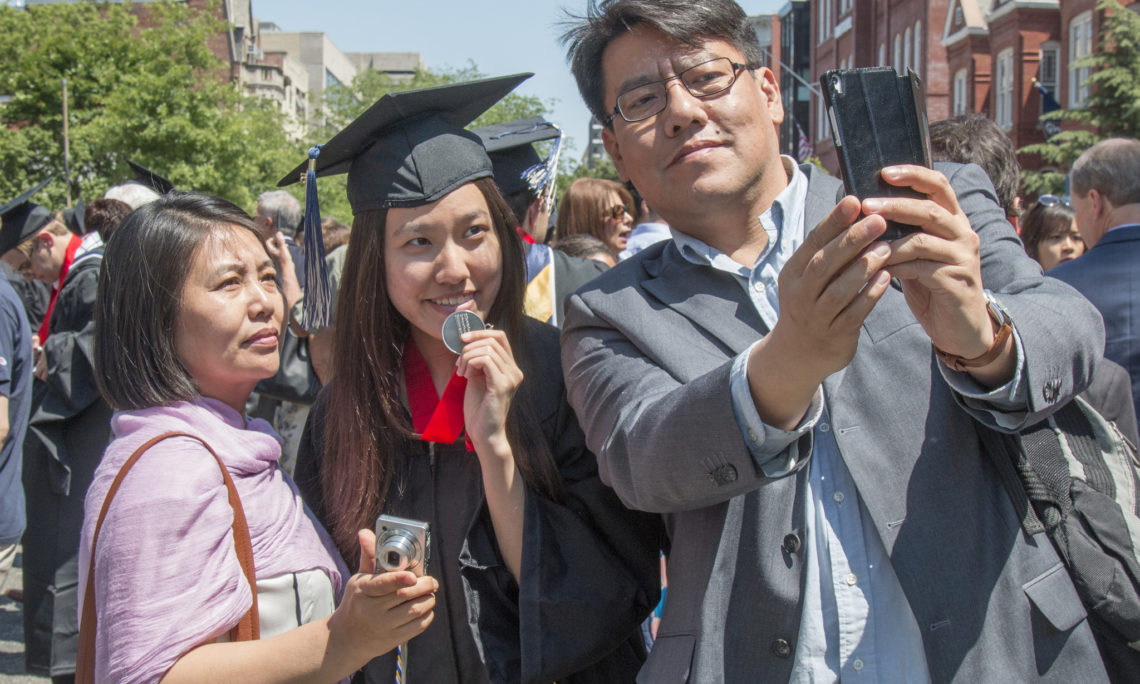 Graduation day at the Elliott School of International Affairs at the George Washington University, Washington DC, May 15, 2015. Photo by Tim Brown.

Do you know that a rising young Cypriot composer has been awarded a full scholarship by a prestigious U.S. university for a PhD program? That several Cypriots are on full or partial athletic scholarships in tennis, football, basketball–even skiing–in U.S. universities? That two sisters from Cyprus are on full scholarships at a university in Iowa? That a student from Cyprus received full funding for her PhD studies and won one of Harvard’s most prestigious literary awards for graduate students?

As the U.S. Ambassador to Cyprus, I was glad to see these talented Cypriots being recognized in the United States. But I was also curious why these young Cypriots chose American universities. When we asked them, they said things like: “You can be whoever you want, do whatever you want, and be who you really are.” “University studies in the United States are not just academics – they prepare you for the real world and provide you with resources once you start going down your career path.” And “I like the flexibility and responsibility that I am given by an American university.”

Even though I went to college many years ago, I would have said exactly the same thing. I double-majored in political science and literature, and studied economics, geology, and Spanish language. I headed an organization devoted to community service, wrote for the school newspaper, and played soccer. In short, I became the person I am today.

Many young Cypriots have told me that they would like to study in the United States, but are concerned by the cost and confused by the number of universities.  U.S. education can be pricey, but when considering a college, it is important to look at the overall costs. Tuition of U.S. universities might be higher than in the United Kingdom or elsewhere, but the day-to-day costs of life in the United States can be much less. If you are a student who wants to study in the U.S.—or the parent of one—there are many ways to fund your education. Almost all colleges and universities provide scholarships, and many of them especially want to attract international students with financial awards, athletic scholarships, and other incentives. In addition, there are thousands of private organizations that help students pay for their educations.

Moreover, a U.S. education provides real value for the money—it is a unique, life-changing experience as the many Cypriot alumni of our universities know. You can combine studies into majors and minors, like I did. No other university system in the world offers such a wide range of studies and the freedom and flexibility to pursue your interests. Moreover, we welcome diversity. There are more than one million international students at U.S. colleges and universities; five percent of the total student population at U.S. institutions comes from overseas. Students from abroad are some of the most valued students, teachers, and researchers in United States because they bring new perspectives and skills and ideas to the classroom and laboratory. The young Cypriot composer I mentioned will be a Teaching Assistant at a conservatory. Furthermore, most universities have international student counselors that help foreign students adjust to life in the United States and give them personalized attention throughout their studies. We see this as a win-win: foreign students benefit from learning about the United States from a real life, in person, perspective; we benefit from having American students exposed to the ideas, cultures, and experiences of students from around the world.

If you want an academic program that fits your interests, a rich campus life full of opportunities to do things you may never get to do again, a chance to build global connections that will last a lifetime, and to explore all your interests and passions, consider applying to a university in the United States. On October 10, the EducationUSA office in the Fulbright Center in Nicosia will host a college fair, with representatives from 18 U.S. higher educational institutions. There you can get objective, accurate information about study in the United States. I’ll be there too. I hope to see you.