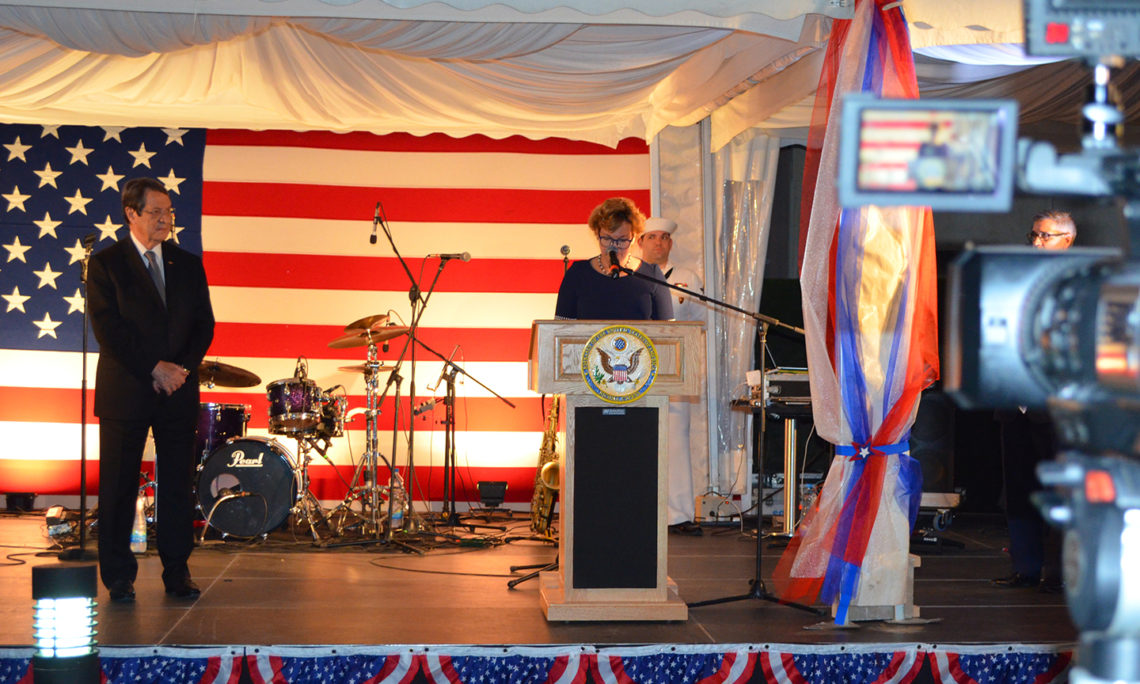 (As prepared for delivery)

Tonight we celebrate the two hundred and forty-second anniversary of the independence of the United States of America.  Thank you for joining us.

We often celebrate Independence Day early because of the July heat.   While Mother Nature hasn’t been nice this month, she did us a favor. The rain made us move the event from my residence lawn to here, and it looks great!

While not Independence Day, June Fifth is important in our history, for it started the journey of a man who forever changed the United States.

On June 5, 1955, civil rights leader Martin Luther King, Jr., received his doctorate in theology.  Throughout his life, from his early days speaking at a church pulpit to his remarks before two hundred and fifty thousand in Washington D.C., King invoked the words of theologians and philosophers to heal America’s deep divisions and identify our shared humanity.

King called for America to fulfill the true meaning of the Declaration of Independence: “we hold these truths to be self-evident, that all men are created equal…”

In just a few years, the civil rights movement ended the system of racial segregation that had endured in the United States since the end of the Civil War, one hundred years earlier.  Though regrettably, King’s dream of equality for all Americans is not yet fulfilled.

King’s powerful words live on—even beyond America’s shores—and inspire us to be better.

In 1965, during a university commencement speech, King remarked:

“Whatever affects one directly, affects all indirectly. I can never be what I ought to be until you are what you ought to be.”

The challenge for all of us, wherever we live, is to combat prejudice, heal divisions and dream up a better future.

For Cyprus, that means all of us working together to create this future.  It remains the hope of the United States, and my hope, that Cyprus will be unified as a bi-zonal, bi-communal, federation.  A unified island would offer a prosperous future for all Cypriots.

I know it is difficult these days to be hopeful.  However, we need to maintain courage – and keep trying.

We can turn to Martin Luther King for inspiration.  He said:

“We must accept finite disappointment, but never lose infinite hope…. The time is always right to do the right thing.”

I would like to take this occasion to express some thanks.

Mr. President, you have been with us for each of my years in Cyprus.  I am – we are – honored and grateful.

I would like to thank the Embassy staff for their dedication to our Mission’s work.  And a particular thank you to the team who made this event possible and to American colleagues departing this summer.

To the Marines who protect us and who make this celebration so special.

To the U.S. Navy band who with their music inspire me and many others to dance.

And to the sponsors whose donations of food, drink and other contributions make this day feel very American.

I also want to thank all of you.  Looking at everyone here, I can see that there is much that brings us together.  We should recognize what we have done.

To help Cypriots know the fate of family members, we have donated nearly one million dollars to the Committee on Missing Persons since its inception.  We have invested in community-based organizations that improve daily life.  One of them, the Bone Marrow Donor Registry, is now a global databank, saving lives on the island, in the region, and in the United States.

The best example of the ties between us are the 2500 Cypriots from across the island who received degrees in the United States thanks to U.S. government grants.  And the 4,000 others – from academics to architects, judges to journalists – who have gone on exchange programs. Everywhere I go on this island, people tell me that their experiences in the United States had a profound impact on their lives.

We are increasing people-to-people ties. We have sent young Cypriots to global forums on entrepreneurship. We organize a summer program that brings Cypriot high school students to Washington, D.C., to learn leadership skills.  This spring, we brought to Cyprus students from Georgia Tech, one of the leading U.S. science and technology universities. They came to sing – as they are part of the university’s nationally-recognized choir. They conducted workshops with and sang for more than 2000 young Cypriots from across the island.

When I arrived here nearly three years ago, I pledged to deepen business-to-business ties.  American companies are increasingly present in such sectors as energy and insurance, financial services and franchising, tourism and tertiary education.  They are creating jobs and opportunities.

Why are Americans doing all this?  Put simply:

We invest in you and in your future.

Looking at the region, we see the Republic of Cyprus as our strategic partner.  In the past four months, we have had visits of a Rear Admiral of the U.S. Navy and top officials from the Departments of State, Treasury, and Defense.  Few countries in Europe have had a similar level of U.S. engagement.

We are helping to maintain peace.  Over the past five decades, we have contributed nearly one billion dollars to UNFICYP in real terms. We are providing counter-terrorism, counter-narcotics, anti-money laundering and cyber security training for Cypriot officials.  The U.S. Navy actively participates in bilateral and multilateral search-and-rescue exercises.

We are making a strong relationship even stronger.

For Americans, Independence Day is a time to reaffirm our commitment to the words of our Constitution, “to build a more perfect Union.”

Thank you for joining us tonight.

Mr. President, I invite you to give remarks.