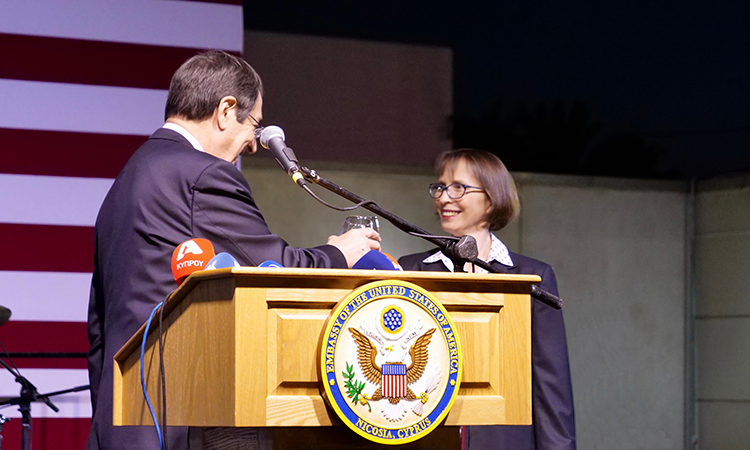 [As prepared for delivery]

Mr. President, Ministers, Honored Guests – Good evening and welcome. Thank you for joining us tonight to celebrate the 243rd birthday of the United States of America.

As you all know, I’m new to Cyprus. Since I have arrived, I have been overwhelmed by the warmth, generosity, and hospitality of Cypriots, as well as the beauty of this island. It is my great delight to have the chance to return some of that hospitality and to welcome you all to my home tonight. Καλωσορίσατε στο σπιτικό μου. Evime hoşgeldiniz.

In the United States, it is traditional to celebrate our Independence Day with a backyard cookout with family and friends. We barbeque together, watch our children march in parades, revel in the fireworks at night. I know that many Cypriots—especially those of you who have studied in the United States—have experienced this celebration firsthand. Music always plays a big part, and tonight we are very happy to welcome blues legend Kirk Fletcher. Blues is an original American art form, and one of our most valued contributions to world culture, so we hope you enjoy this evening getting to hear one of its finest contemporary practitioners live.

We are celebrating our Independence Day early here in Cyprus. Although it is not July 4, it is also a very special and solemn day in American history. Today, June 6, marks the 75th anniversary of D-Day, when the Allies landed in Normandy. This extraordinary moment in many ways embodies the American commitment to Europe. With our allies, we eventually broke the Nazi grip on Europe and began a process of building a Europe that is whole, free, democratic, prosperous, and at peace. Following the war, the United States invested billions of dollars in the rebuilding of the continent through the Marshall Plan, helped to protect democratic nations through NATO, and supported what was to become the European Union. In so many ways, that great legacy began on this day 75 years ago and, while most of that day’s survivors have passed, the glory of their accomplishments has not.

President Trump has said, “A strong Europe is a blessing to the West and to the world. One hundred years after the entry of American forces into World War I, the transatlantic bond between the United States and Europe is as strong as ever and maybe, in many ways, even stronger.” The same is true for Cyprus, and our relationship with Cypriots. I am extremely fortunate to come to Cyprus at a point when U.S.-Cypriot relations have never been stronger.

As Secretary Pompeo noted at a recent trilateral meeting in Jerusalem with you, Mr. President, along with your Israeli and Greek counterparts, we see Cyprus as a “key partner in security and prosperity.” We have to be partners in order to build a better and stronger future. This is the foundation for everything we are doing to expand and deepen our bilateral security partnership, and the relationship between our two countries.

The discovery of hydrocarbons in the exclusive economic zone of Cyprus offers great promise. We hope such resources promote prosperity in the entire Eastern Mediterranean and help to diversify Europe’s energy supply. We have been deeply concerned by Turkey’s announced intention to begin drilling in the waters off Cyprus and we have urged the Turkish authorities to halt these operations. The United States recognizes the right of the Republic of Cyprus to develop resources in its Exclusive Economic Zone. We also believe these resources should be equitably shared between both communities in the context of an overall settlement.

It is our earnest hope that such resources will soon benefit a united Cyprus, and the United States continues to support efforts by the leaders of the Greek Cypriot and Turkish Cypriot communities, facilitated by the United Nations, to forge a just and lasting settlement that will reunify the island as a bizonal, bicommunal federation. We hope negotiations will resume soon, and we firmly believe a reunified island would offer a better and stronger future for all Cypriots.

There is another special anniversary which Americans are commemorating this year. You may have noticed our “astronaut” on the way in! It is the 50th anniversary of Apollo 11 and humankind’s first steps on the surface of the moon. When I think of both D-Day and Apollo 11, I marvel at the vision and spirit of innovation which each required. These were feats of the greatest daring. Extraordinary individuals worked together and leveraged new technologies and ways of thinking to overcome huge, seemingly impossible obstacles.

A plaque the American Astronauts left on the Moon reads, “We came in peace for all mankind.” And so they did. It is an achievement in which we can all take pride. I am delighted to quote from the opening of the goodwill message from Cyprus, which was inscribed on a silicon disc that the Apollo 11 crew left on the Moon. It said: “Man has conquered the moon and widened his horizons…”

Innovation. Wide horizons. Daring feats. The Independence of the United States of America and the principles embodied in our Declaration of Independence are also a daring dream. It is one that has kept my country looking forward for 243 years and will continue to do so in the future. My colleagues and I are excited about the prospects of all that we can achieve together here with our friends in Cyprus. Thank you for being here tonight and sharing in our celebration.

Mr. President, it is with great pleasure, that I invite you to give remarks.