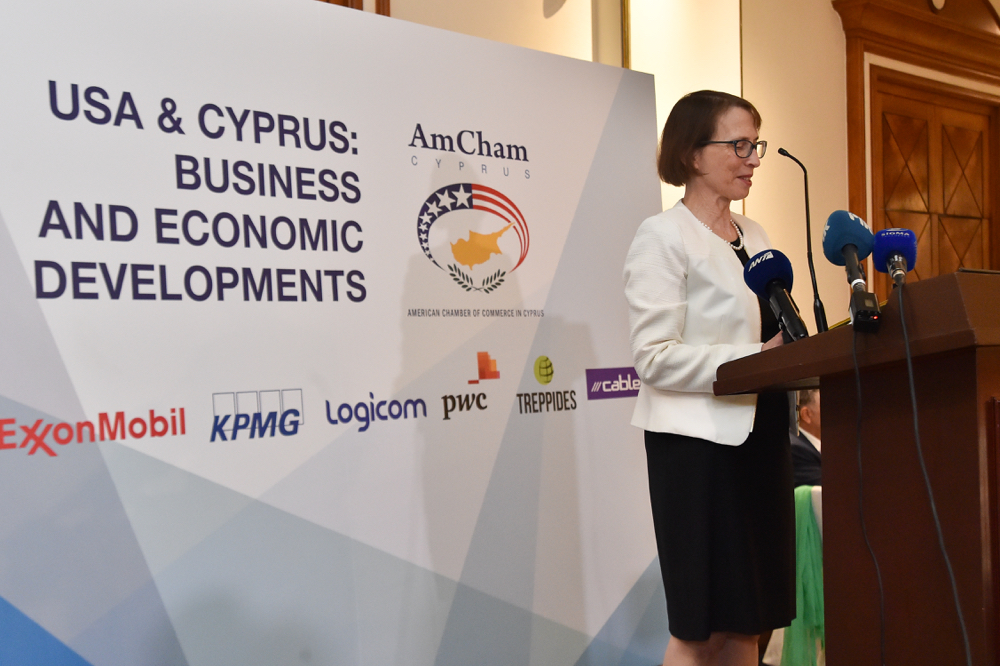 Remarks by Ambassador Judith Garber at the American Chamber of Commerce

Thank you very much for giving me the opportunity to be with you here tonight.  Throughout my career I have worked with AmChams in many countries, and I’ve always found here at AmCham one of the best partners for the U.S. government in strengthening bilateral ties and promoting American values and culture.  I’m certain this is only the very beginning of a beautiful partnership.

Economics has been my area of specialty and a personal passion throughout my diplomatic career.  Promoting the interests of American businesses and American consumers has been a core goal of U.S. foreign policy for the last 75 years.  Belief in the power of the free market system predates our fight for independence; better trade relations have been a goal since our nation was born.  Not since the end of World War II, however, has our leadership been so focused on economic diplomacy.  President Trump is intent on creating an environment where business in general, and American business in particular, can thrive.

The President, as you all know, has been a leader in the American business community for much of his life.  Now, as the leader of the United States, his experience as an entrepreneur has led him to the conviction that a strong global economy is essential to achieving the goal of American security.

Our National Security Strategy states this clearly: “Economic security is national security.”  At first glance, this might seem like a message for a purely domestic audience.  Nothing could be further from the truth.  Why?  Because the fact is that America cannot achieve economic security without prosperous, stable, and secure trading partners.  My main message to you here today is that Cyprus’ prosperity is in America’s national interest, and I am committed to working with AmCham and the rest of the business community to help achieve that prosperity.

So, let’s take a look at what we mean by economic security.  Our National Security Strategy talks about four themes:

Each of these of these themes has implications for how the United States will work with Cyprus over the next few years, and how we look to support the business community, and all citizens of Cyprus, in achieving the prosperity and stability we all hope to see in the Eastern Mediterranean.

First, the multilateral trading system, and in particular the World Trade Organization (WTO):

The World Trade Organization was created to spur economic growth and raise global standards of living by establishing international trade rules premised on principles of transparency, openness, and predictability.

Although economic tides worldwide have risen since the WTO’s establishment nearly 25 years ago, its rules have not evolved to reflect those changes.  A division between developed and developing countries established 25 years ago still lives today, creating market distortions and giving unfair advantage to certain countries.  China most dramatically illustrates this point. Since joining the WTO in 2001, China has continued to insist that it is a developing country and to avail itself of flexibilities granted to developing countries.  China, however, as everyone in this room knows, is now the second largest economy in the world measured by GDP.  China accounts for 13% of all global exports.  It ranks first in the world for high-technology products.  And China is home to 120 of the 500 world’s largest companies.   The status quo cannot continue.  Change is needed and we are committed to pushing for these changes that will benefit not only the United States, but also countries of the European Union, including Cyprus.

Reforming the multilateral trading system is closely related to fostering free, fair, and reciprocal trade.  It has long been a tenet of American economic diplomacy that our companies – the companies you represent in Cyprus – can compete with the best in any market, as long there is fair competition, devoid of systematic and unbridled corruption.  Our National Security Strategy states that “using our economic and diplomatic tools, the United States will continue to…work with countries to improve their ability to fight corruption so U.S. companies can compete fairly in transparent business climates.”

There is nothing more valuable to the United States in the fight against corruption than a like-minded partner.  In its efforts over the past several years to improve its anti-money laundering efforts, the Republic of Cyprus has shown itself to be such a partner.  Last week we had the opportunity to highlight the success of the Republic of Cyprus in strengthening its banking regulations with the visit of the Congressional Delegation from the U.S. House Committee on Financial Services, led by Chair Maxine Waters.   After her meetings, Chairwoman Waters said “I am pleased to see that the close cooperation and coordination between the Republic of Cyprus and the United States is beginning to pay off. And while I would like to see additional progress toward detecting and stopping illicit financial activity, our discussions and meetings with our Cypriot hosts, for which we are grateful, leave us confident that Cyprus is up to the challenge.”

And as the Republic of Cyprus looks at major infrastructure projects in the coming years, we are counting on the Republic of Cyprus to conduct open and fair tendering processes.  This is particularly important as in some areas, such as energy or 5G, that have a nexus with national security considerations.  5G has vast implications for everything from artificial intelligence, to manufacturing, to public services.  If a 5G network is compromised, your future toaster, your self-driving car, your bank, your hospital, your electrical grid, and other critical services could all fail.  Since 5G will touch every aspect of life, the vendors who build and maintain access to it will have tremendous capability and responsibility to protect economic and commercial interests, national security, and human rights, including privacy and freedom of expression.   For all these reasons, we will continue to advocate for Cyprus to carefully weigh its options for creating its 5G infrastructure – including acquiring services from trusted European or perhaps even American providers – in order to ensure the security of the entire network.

Energy.  In the United States, we are looking to domestic sources of clean, affordable, and reliable energy to underpin a prosperous, secure, and powerful America for decades to come.  We are committed to supporting energy initiatives that will attract investments, safeguard the environment, and strengthen our energy security.

The countries of the Eastern Mediterranean have similar goals.   The discovery of hydrocarbons in the Exclusive Economic Zone (EEZ) of Cyprus offers great promise and responsibility.  We hope such resources promote prosperity in the entire Eastern Mediterranean region and help to diversify Europe’s energy supply.  Our position is well known:  The United States recognizes the right of the Republic of Cyprus to develop resources in its EEZ.  We also believe these resources should be equitably shared between the Greek Cypriot and Turkish Cypriot communities.  We are concerned about the unlawful activities of the drillship Yavuz, which is operating within the territorial sea of the Republic of Cyprus (ROC).  This provocative and unlawful step raises tensions in the region. We are confident that these resources can contribute to the overall economic well-being of Cyprus and thus be a positive force for achieving a solution to the Cyprus problem.

We are proud that two American companies – ExxonMobil and Noble Energy – are participating in this game-changing development.  I firmly believe other U.S. companies in the energy sector will join them, as Cyprus transitions from discovery of energy resources to the hard task of bringing those resources to market.  And that’s why, as Cyprus develops its natural resources, I cannot stress enough the importance of creating an environment that attracts investment.  Investors from America and elsewhere always look for predictable, stable environments, with assurances that agreements and contracts will be honored, backed by secure financial institutions to manage income and expenses.

Also important, and encouraging, are the trilateral initiatives among Cyprus and Greece and their regional partners such as Israel, Egypt, and Jordan.  These arrangements build resilience and act as a multiplier to attract investment to the region.  Secretary Pompeo was pleased to have participated in such a gathering last March in Jerusalem with President Anastasiades, Prime Minister Netanyahu, and then-Prime Minister Tsipras.  Our leading diplomat for energy affairs, Assistant Secretary Frank Fannon, participated in a similar trilateral meeting last month in Athens.  We will continue to look for opportunities to join such meetings to lend our support as they advance security and prosperity in the Eastern Mediterranean region.

I am optimistic about the contributions hydrocarbons and regional integration can make to the economic strength and security of Cyprus.  But a truly strong economy cannot rely entirely upon the relationships built yesterday or the discoveries made today.  Which brings me to our last theme:  innovation.

A healthy, growing economy also needs to foster innovation and support the ideas and visions of tomorrow.  In our National Security Strategy, our leadership has committed to prioritizing “emerging technologies critical to economic growth and security, such as data science… autonomous technologies… nanotechnology, advanced computing, and artificial intelligence.”  Most importantly for our work here in Cyprus, this Administration is committed to nurturing a “healthy innovation economy that collaborates with allies and partners.”  And what better partner than Cyprus – a seemingly natural center for innovation, within two-hour flight of 500 million people, with excellent universities and English language skills and a strong and vibrant diaspora in most of the world’s major business centers.

So, what does an innovative economy look like?  It is one where regulations are sensible; where entrepreneurs have access to the marketplace; where intellectual property rights are defended and upheld; where digitization is encouraged and facilitated; and where investments in education and technological literacy are a priority.    It’s exciting to see what is happening here in Cyprus today – you just feel you’re at the beginning of something transformational.  We are excited to support the Republic of Cyprus as it moves forward with its ambitious plans to grow its innovation ecosystem and digital economy.  We’re bringing to share knowledge such as the recent visit of experts on research and innovation from the University of Texas at Austin and seeking greater collaboration between our research universities and entrepreneurial mentoring networks.

So, you may be asking, why did I focus on this topic with a private sector audience?  The answer is because, in the end, all of this is about you.  The public sector can do a lot to foster economic health and security.  But in the end, we cannot create it. Only a thriving and robust private sector can do that.  If economic security is national security – as we firmly believe it is – that makes all of us partners in these efforts.  American national security, Cypriot national security, and the security and stability of the Eastern Mediterranean region are all inseparably connected.  I look forward to working with the leaders in this room in advancing peace and prosperity for both our countries, and in working together to find solutions to our shared challenges.