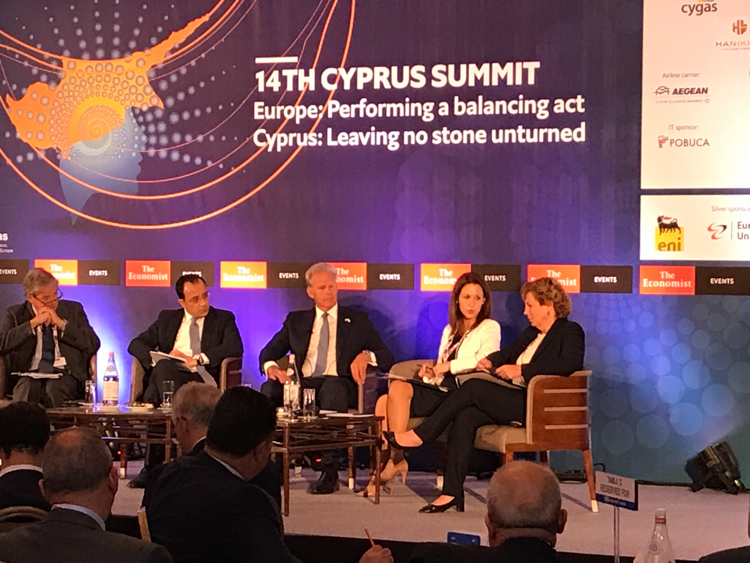 Ambassador Doherty at panel of The Economist Conference, November 2, 2018

(As prepared for delivery)

Thank you, I would like to thank the Economist for inviting me to speak today. It is an honor to be a panel with Minister Christodoulides and Deputy Minister Oren.

As this will be my last opportunity to speak here as U.S. Ambassador to Cyprus, I will speak to our topic, but I hope you’ll indulge me as I offer some broader thoughts as well.

The United States has recognized we must help stabilize Europe’s southern frontier and the Eastern Mediterranean Basin. Terrorism, Russian aggressive actions, ongoing conflicts in the Middle East and North Africa, threats from Iran and unprecedented migration flows to Europe are among the most pressing challenges we all face. And they play out in this region.

The Eastern Mediterranean region poses particular challenges – political, economic, military, and cultural. We are constructing a long-term strategy to bolster the United States’ presence and to support the interests we share with our friends and allies in the Eastern Mediterranean. We have a great opportunity by working together to improve economic, commercial, transportation ties in the region, which will create jobs, spur on economic movement and growth, and attract investment – all of which would present a brighter future for the young people of this region.

We see Greece as an anchor of stability in the Mediterranean and Western Balkans, and a key strategic partner of the United States. We are working purposefully to stabilize the relationship with Turkey and to keep it on a Western track. On a long-term basis, Turkey provides a counterbalance to Iran. Israel is a valuable and capable ally to the United States that today faces dangerously escalating regional threats. Israel has the enduring and unshakable commitment of the President, this Administration, and the American people to Israel’s security.

We are also strengthening our partnership with the Republic of Cyprus. We believe the Republic of Cyprus can play an important part in our shared efforts to counter transnational threats and enhance security and stability in the Eastern Mediterranean. Counter-terrorism, nonproliferation, counter-trafficking, and cybersecurity are some of the areas where we see opportunities for cooperation.

We are also investing in the Cypriot economy. In my time as Ambassador, American companies have become increasingly active in the energy, insurance, banking and other financial services, franchising, tourism, and tertiary education sectors. American companies in Cyprus have created, directly or indirectly through investments, some 5,000 jobs here. We expect this number to grow.

Our investments are in Cypriots and in their future. We actively promote entrepreneurship to boost Cypriot competitiveness in the global economy and to provide opportunities for young people. One of my favorite initiatives has been our Summer Institute program that seeks to identify tomorrow’s young leaders from across Cyprus and send them to the United States on a leadership program. I have been particularly impressed by the young women on this island, and expect to see many of them as leaders in business, science, academia and politics. The voices of young people and women should be heard more here.

A potential economic game changer for the Eastern Mediterranean, including Cyprus, is of course energy resources. We believe Europe writ large needs more sources of energy, and we see the potential benefits of the new finds extending beyond the immediate region. We are clearly not blind to the potential for tensions surrounding the exploitation of hydrocarbons.

We believe the Republic of Cyprus has the right to develop and exploit its natural resources. Furthermore, we believe those resources should be shared equitably between both communities in the context of a settlement. We also believe that military responses to potential commercial disputes are inappropriate.

I hope that hydrocarbon exploration efforts here are successful. I have worked on energy issues for most of my diplomatic career. I know that even when deposits are discovered, developing these resources and then selling them will be a matter of years, maybe even a decade away. There is ample time, therefore, for political processes to work before anyone will see financial returns.

Just as hydrocarbons present both challenge and opportunity, the financial sector does as well. Cyprus has made a strong recovery since the financial crisis in 2013, and financial services have certainly played an important role. That said, the Republic of Cyprus shares the challenge of combatting illicit finance. I commend the government for the actions it has taken thus far to address this threat but I urge more to be done. As we have seen elsewhere in the world, illicit actors will seek to find weak links and governments, banks, and law firms need to be vigilant 24/7 and adapt to changing circumstances.

With respect to a solution to the Cyprus problem, I feel a genuine sadness as I contemplate the impending conclusion of my tour here and see that this beautiful island and its wonderful people remain divided. Being an Ambassador is a remarkable privilege anywhere, but especially here. I have visited every corner of this island and met thousands of Cypriots. It is clear to me that there is a shared Cypriot identity, and it is one in which people can take pride.

As a friend of Cyprus, I wish to offer the suggestion that perhaps what is needed is a clear vision for the future. In my travels around Cyprus over the past three years, I have asked many Cypriots about what Cyprus should look like in 2030, what their vision of a unified country is, and what it means. I was disappointed when I did not receive many considered responses.

For my own part, were I to be asked that question, I would say the U.S. believes a bi-zonal, bi-communal federation offers the best future. I see a unified Cyprus in 2030 as a robust regional economic power. I see a shipping industry that is in not only in the Top 10, but one of the two or three most important in the world. I see a unified Cyprus with an integrated tourist economy embracing all this incredible island has to offer: beach holidays, to be sure, but also 10,000 years of history, extraordinary local cuisine, delicious wines, hiking, mountain biking, and so much more. Add to that a unified and thriving financial sector, widespread English driving a higher education hub for the region, and if energy develops, too…. then suddenly the vision broadens …..And then I could imagine Cyprus as the energy Norway or the financial services’ Singapore of the Eastern Mediterranean.

The young people of Cyprus whom I’ve been privileged to meet these past three years are every bit the peers of their counterparts in larger countries. They have what it takes to succeed in a 21st Century global economy. I think this island could have a tremendous future. I hope the people of Cyprus will grasp it.