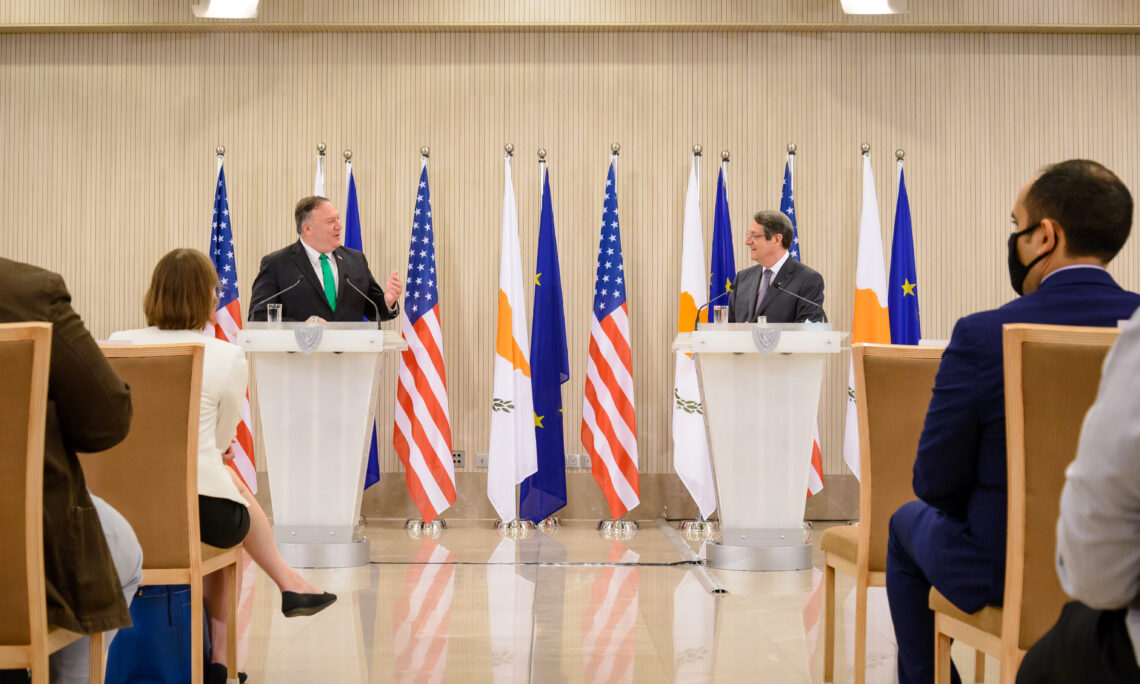 Secretary Pompeo and President Anastasiades at the Cyprus Center for Land, Open-seas, and Port Security Memorandum of Understanding Signing Ceremony

SECRETARY POMPEO: Thank you. Thank you and good evening. Happy Saturday evening to everyone. President Anastasiades, we had a great meeting. Thank you so much for hosting me. Our conversations reflected a robust, growing diplomatic, security, and economic partnership between the United States of America and the Republic of Cyprus. We’re proud to cultivate ties with nations that share our values.

I daresay that our relationship has never been better, and I am proud of that. As just one example, security cooperation between our two countries is growing. On September 1st I announced the decision to temporarily waive export controls on direct commercial sales of non-lethal defense articles and services for the Republic of Cyprus, and in July we invited Cyprus to participate in our military training program known as IMET. That’s a big deal and it’s great. We’ll welcome your service members.

Today the foreign minister and I just signed an MOU to create a new training center to be funded by the United States and built here in Cyprus. It will provide expertise for the rest of the region on border security and nonproliferation. It will be known as the Cyprus Center for Land, Open-seas, and Port Security, or CYCLOPS. Well done, very clever.

Security cooperation matters all the more as we see nations which don’t share our values trying to obtain new footholds in the region. To that end, I raised the United States concern over Russia’s money-laundering activities and its regular port calls here. We know that all the Russian military vessels that stop in Cypriot ports are not conducting humanitarian missions in Syria, and we asked to consider – we asked Cyprus and the president to consider our concerns.

Of course, I also heard from the president the Republic of Cyprus’ perspective on challenges in the Eastern Mediterranean related to energy exploration and development, which he spoke of just a minute ago. I reiterated that President Trump has spoken with both President Erdogan and with Prime Minister Mitsotakis already.

Countries in the region need to resolve disagreements – including on security and energy, resource and maritime issues – diplomatically and peacefully. Increased military tensions help no one but adversaries who would like to see division in transatlantic unity. Energy in the Eastern Mediterranean has an ability to bring states together. Regional cooperation is absolutely necessary for durable energy security, the creation of new markets, and economic prosperity in the Eastern Mediterranean.

We remain deeply concerned by Turkey’s ongoing operations surveying for natural resources in areas over which Greece and Cyprus assert jurisdiction in the Eastern Mediterranean. The Republic of Cyprus has the right to exploit its natural resources, including the right to hydrocarbons found in its territorial sea and its economic – exclusive economic zone.

We also believe that the resources of Cyprus should be shared equitably among the Greek Cypriots and Turkish Cypriots communities.

Finally, the United States continues to support a comprehensive settlement to reunify the island as a bi-zonal, bi-communal federation which would benefit all Cypriots as well as the wider region.

Mr. President, thank you for hosting me. God bless you. I hope you have a wonderful rest of your Saturday night.