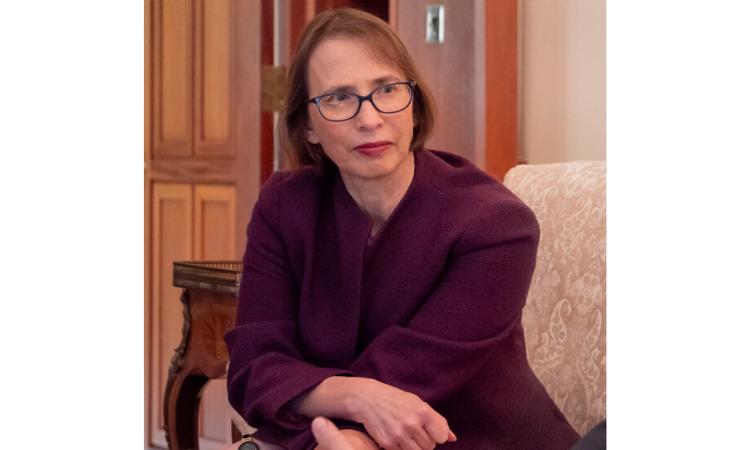 “When we have emerged from this crisis, I am confident that our relationship will become even broader and deeper.”

Ambassador Garber’s interview with Phileleftheros, as published by the newspaper on April 26, 2020. Original article in Greek on the Phileleftheros website.

U.S. Ambassador to Cyprus Judith Garber sends a strong message to Turkey regarding its operations in the Eastern Mediterranean.  In an exclusive interview to Phileleftheros, she urges the Turkish authorities to halt the operations they are carrying out by sending the drilling vessel Yavuz to the sea to the south of Cyprus.  Judith Garber says, “The United States is deeply concerned by recent reports of Turkey’s plans to drill in the waters off Cyprus.”  She points out that “resource development in the Eastern Mediterranean should promote cooperation,” and underlines the need that oil and gas resources “should be equitably shared between both communities.”

Referring to the U.S.-Cyprus relationship, Judith Garber notes that it has been growing steadily stronger and sends the message that, “When we have emerged from this crisis, I am confident that our relationship will become even broader and deeper.”

Regarding the American companies’ postponement of their activities, she notes that this has happened worldwide and assures that interest in the development of hydrocarbon resources remains unchanged.

While the world is occupied with this pandemic, Turkey has sent drilling vessel Yavuz to explore for hydrocarbons in Blocks 6 and 7 of Cyprus’ EEZ, which have been licensed to European energy companies, ENI and TOTAL.   What is the United States reaction to this provocation?

The United States is aware of reports the Turkish drillship Yavuz arrived April 20 in an area that Cyprus claims as its exclusive economic zone.  We urge Turkish authorities to halt these operations and continue to call on all parties to avoid steps that raise tensions in the region.  The United States is deeply concerned by recent reports of Turkey’s plans to drill in the waters off Cyprus.  This provocative step raises tensions in the region.  Resource development in the Eastern Mediterranean should promote cooperation and provide a foundation for durable energy security and economic prosperity throughout the region.

We continue to believe Cyprus’s oil and gas resources, like all of its resources, should be equitably shared between both communities.

The bilateral relations between the United States and Cyprus are at their best ever.  Will this be affected by the COVID-19 crisis?

The U.S.-Cyprus relationship has been growing steadily stronger, even before the outbreak of this virus.  Our mutual cooperation through this crisis is a sign of our commitment to the people of this island and to the Eastern Mediterranean region.  When we have emerged from this crisis, I am confident that our relationship will become even broader and deeper.

Under any other conditions, our main topic would had been the issue of energy and the cooperation of the two countries in this field.  How secure is this cooperation and what we should expect in the future, when this crisis will be over?

Our cooperation on energy is exactly as strong and secure as it was before the appearance of COVID-19.  As Assistant Secretary of State Francis Fannon during his trip here in February stated “Energy is more than BTU, barrels, and revenues.  It is a precondition for economic development and political security, and we believe that energy is a possible catalyst for cooperation.”

I have been encouraged by the examples of cooperation of the bicommunal technical committee on health during this outbreak.  Cypriots from both communities have found ways to share information, to cooperate and work together for the good of all people on this island, especially in support of the most vulnerable among them.  No one who knows the generosity of Cypriots will be surprised by this.

As we emerge from this crisis, we look forward to the resumption of efforts by the leaders of the Greek Cypriot and Turkish Cypriot communities, facilitated by the United Nations, to forge a just and lasting settlement that will reunify the island as a bizonal, bicommunal federation.

WE WILL ALL TAKE LESSONS FROM THE PANDEMIC

In a recent Op-Ed you said, “We will defeat COVID-19 and rise stronger in its wake.”  The question is whether as states, nations and people we will rise up stronger after this pandemic.  Do you believe we will be wiser?

The COVID-19 pandemic has been an opportunity for reflection on a global scale.  We will all learn lessons from this pandemic.  I think that Cyprus and the United States will be much better prepared to face threats from infectious disease in the future because of what we are learning every day right now.  For individuals, I think this crisis has been a powerful reminder of the value of spending time with friends and family, with those we love, something I suspect many of us took for granted before the pandemic.

This is perhaps the first time in history when no country, strong (i.e. the United States) or small (i.e. Cyprus) has been able to cope with a pandemic. Should states eventually change their priorities and pay more attention to health than armaments?

The U.S. healthcare system is a global leader in care and the best funded healthcare industry in the world.  We do not believe the government needs to manage all or even most of that funding, but this does not mean we do not prioritize health.  We do, and the extraordinary progress we’ve made fighting this and other diseases is proof of that.

Since 2005, the World Health Organization has called on all countries to implement the International Health Regulations.  Some countries such as the United States did, but many did not.

Among other measures, these global regulations call for countries to communicate timely, accurate, and sufficiently detailed public health information.  They also lay out the rules and the timeline for notifying the World Health Organization of events that may constitute a public health emergency that would be of international concern.  As Secretary of State Michael Pompeo said this week discussing the importance of the International Health Regulations and the COVID-19 pandemic, “This transparency and getting it right is critical to saving lives today and in the future.”

All countries need to prioritize the safety of their citizens.  Leaders need accurate information and intelligence to assess threats — health, military, economic, environmental – and then make difficult decisions about allocating resources.  Transparency and information sharing here is key.

The ROC has done an excellent job

We see that in parallel with the fight against COVID-19 and the consequences of the pandemic, another political and diplomatic battle is being fought, with each country trying to show that it offers more than the other. Do we need this kind of confrontation at this moment?

Countries should work together, not against each other, to fight COVID-19.  I also think it is important to highlight the support of the American people for the people of Cyprus and to countries around the world.  For example, the main laboratory conducting testing in the Republic of Cyprus, Cyprus Institute of Neurology and Genetics, was established with funding from the American people.

We also hope that all nations are inspired to act and to give as they can to help defeat this common enemy.  This week, Secretary Pompeo announced that the United States had committed an additional $270 million in health, humanitarian, and economic assistance to boost response efforts worldwide. This assistance will not only go towards fighting COVID-19, a large portion of the funding has been designated to help governments, civil society, and the private sector prepare for, mitigate, and address second-order economic, civilian-security, stabilization, and governance impacts of COVID-19.   Today’s announcement brings the total global investment from the U.S. Government since the outbreak of COVID-19 to more than $775 million to date in health, humanitarian, and economic assistance. And individual Americans as well as private American businesses, nonprofit groups, faith-based organizations, and charitable organizations have donated more than $3 billion to the cause of fighting this disease and helping those affected by it.

We announce this not to draw attention to ourselves but to let the world know that those with the means to do so are helping and to reassure everyone that we are in this fight together.

What are the messages the U.S. gets from this crisis?

One important message is the importance of transparency when dealing with health crises.  Germs and pandemics do not respect borders, and so we have learned the importance of cooperation between states in providing information and resources in a transparent, open, efficient way.

I think we have also learned that those values are important at the individual level as well.  The Republic of Cyprus has done an outstanding job of being transparent with its citizens and in providing clear guidance to them, and  Cypriots have shown that they are willing to cooperate with authorities, follow instructions, share information, and make personal sacrifices for the common good.  These efforts are clearly paying off.