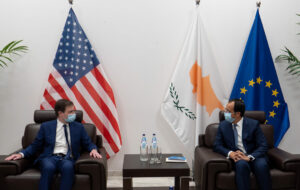 The two discussed the growing strategic significance of the Eastern Mediterranean and recent developments in the region, including in Lebanon. Under Secretary Hale expressed America’s desire for increased cooperation on hydrocarbon development as a means to provide durable energy security and economic prosperity throughout the Eastern Mediterranean. He reaffirmed American support for the right of the Republic of Cyprus to exploit its natural resources, including the hydrocarbons found in its territorial sea and exclusive economic zone and that these resources should be equitably shared between the Greek Cypriot and Turkish Cypriot communities.

Under Secretary Hale affirmed the deepening partnership and shared values between America and the Republic of Cyprus. He applauded the expanding bilateral security cooperation, especially in counterterrorism, maritime and border security, and the prevention of human trafficking. He pointed to Secretary Pompeo’s announcement in July of the the Department of State’s intention to provide International Military Education and Training (IMET) funding to the Republic of Cyprus – contingent on Congressional appropriations and notification – as a symbol of the deepening cooperation.

The two also discussed the ongoing division of Cyprus. They expressed continued support for UN Security Council resolutions on Famagusta. The Under Secretary affirmed America’s support for the UN-facilitated, Cypriot-led process to achieve a peaceful solution, based on a bizonal, bicommunal federation and in accordance with UN Security Council Resolutions.